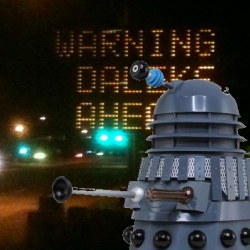 We’ve reported in the past about road signs that have been hacked to warn about zombies, of an invasion by the British, and even to spell the word “POOP”.

Now, according to media reports, a road sign is warning of an interstellar invasion – all the way from the planet Skaro.

The Daleks, the extermination-loving tin pepperpots from British sci-fi TV show “Doctor Who”, have clearly picked up on the programme’s growing popularity in the United States, and allegedly invaded Denver, Colorado. Mystery surrounds how practical jokers managed to meddle with the electronic construction sign along Arapahoe Road in Boulder, Colorado, as the local department of transportation is stridently claiming that the device was properly secured.

And we don’t know who is behind the hack either. Davros didn’t return our calls.

In the past, companies who put these signs by the roadside have shown carelessness about their security – by not physically locking them or failing to choose hard-to-guess software passwords.

Obviously, it’s never a good idea to mess around with signs designed to share messages with road traffic – but I can’t deny that the seven-year-old version of me would have been utterly thrilled to see this.