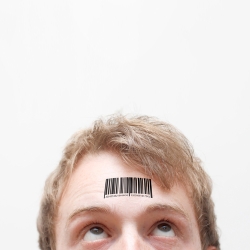 First item: science fiction writer Elizabeth Moon does not believe that all humans should be subcutaneously RFID chipped at birth.

This is contrary to what Slashdot contributor Bob the Super Hamste wrote last week.

It’s not surprising that Bob the S.H. might come away from listening to the BBC “60 Second Idea to Improve the World” radio segment on Future Wars, for which Moon was one of three guests, thinking that Moon espoused the idea of everyone getting chipped or barcoded at birth, her reasoning being that it would prevent identification mistakes and even allow soldiers to identify combatants from non-combatants.

After all, that’s what Moon said.

In doing so, she set off a firestorm of outrage, with hundreds of BBC Future Facebook page commenters alluding to the Nazis already having done it at Auschwitz, Dachau and Buchenwald. From there, things got out of control. Rational outrage over Big Brother spiraled into nutty outrage over the Mark of the Beast supposedly being represented in UPC barcodes.

How do I know Elizabeth Moon isn’t espousing Nazi-like Mark of the Beast chipping or barcoding, particularly given that she actually voiced support of such identification, which she would require if she were, in her words, “Empress of the Universe?”

Because I came across one lone voice of reason in the tidal wave of Facebook commenters. That voice of reason pointed to Elizabeth Moon’s blog, in which the author explained how ludicrous it would be to take it all seriously. As Moon explains it, the format of “The Forum” includes a 60-second “idea to change the world” segment. She was told it was the “entertaining, fun part” of the show.

She interpreted that to mean “light-hearted interlude.” The BBC asks participants to come up with an idea, “however impractical, impossible, unnecessary, and/or undesirable,” she writes.

The BBC staff picks an idea, and the person whose idea it was is then expected to present and defend it.

Moon actually came up with two ideas: the one about chipping, and another one about explosives that degrade into fertilizer instead of hanging around for years waiting to blow people up.

Her description of this idea:

"The other idea was time-limited munitions that wouldn't hang around for years being a hazard for anyone who walks across the ground...though as it was near midnight by then, and I'm a morning person, the complete concept of this didn't hit me until early morning. (Nitrogen-based explosives could be set - one way or another - to degrade to fertilizer. Could be controlled either by departing forces initiating the degradation or environmentally modulated. Maybe 'land-mine-casing-eating bacteria'??)"

"Seriously...you thought it was for real? … The term 'Empress of the Universe' wasn't a clue that this was a science fiction writer making something up?" Which all leads us to the second item, directly related to the first: sometimes, journalists need to fill rigidly formatted little segments.

Typically, they want the material to be incendiary, since that will garner substantial page views. I refer to such material as “click candy.”

Critical thinking is apparently a tendency of the minority, given that even after the Facebook commenter had posted an admonishing note about Moon having made it all up, the 666-ers ignored him or her and continued to squawk.

Should all humans be chipped? There are solid reasons to implant data about medical history, medications, allergies and contact information for those with chronic medical conditions.

Are we there yet? No. Issues remain, including microchips leading to cancerous tumors at the site of implant, as well as other adverse tissue reaction and potential chip migration.

As far as the Mark of the Beast goes, fortunately for the internet, Sophos is on top of all matters Satan-related.

Paul Ducklin, from Sophos’s Tribunal of the Holy Office of the Inquisition – oh, dear, I beg your pardon, that’s a typo; Paul is actually Head of Technology, Asia Pacific – owns and, evidently, can read a Greek New Testament.

With said holy book, he has shed light on the appropriate Satanic usage of the number 666 in product version numbering and therefore, if you’ll allow me to extrapolate, in human bar coding.

To wit: in 2009, Sophos released Sophos Anti-Virus for Linux SAV version 6.6.6, precipitating product management’s move to ascertain whether the company was shipping out anti-virus marked with the Number of the Beast.

As it turns out, 666 is actually the number not for Satan him- or her-self (I am not convinced Satan has a gender and tend to associate the fictional entity more with, say, convoluted privacy policies), but for the name of the beast.

Here’s what Duck told spooked product managers at the time:

"Product Managers, you may stand down from satanic alert. Firstly, 666 is properly the number of the name of the beast. I challenge you to make a numerological connection - or, indeed, any other sort of connection - between the text 'Sophos Anti-Virus for Linux, September 2009' and the number 666 (and, anyway, the beast is a man, not a computer program). Secondly, the tag we've given to SAV for Linux this month is not the number 666, but the text string 6.6.6."

Likewise, the beast is a gaseous emission, or perhaps a privacy policy, or maybe then again a man romantically involved with Saddam Hussein if you watch South Park, but most definitely not a barcode.

In short: let’s leave Elizabeth Moon alone. She wasn’t serious about chipping everybody.

A good lesson to take away from this goofball, faux controversy is that the world of security and privacy breeds sensationalistic headlines.

But for her sake, let’s hope that history gets it right.

13 comments on “Take a 666 chill pill: ‘Barcode at birth’ author was just joking”