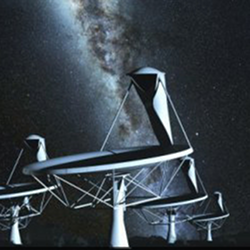 In computer security history, the word Ska is most closely associated not with the musical genre that led to reggae, but with a widespread mass-mailing virus also known as Happy99.

Happily, that negative association has now been taken over by SKA, the Square Kilometre Array Telescope.

As its name suggests, the SKA will be – amongst other things – a grid of radio telescopes, comprising both dishes and arrays, in an area approximately 1km x 1km. When finished, it’s expected to have about 3000 dishes, each 15m in diameter, capable of moving and capturing data both individually and in precise synchronisation.

Whilst this won’t give exactly the same results as a perfectly-formed dish 1000m in diameter, computer synthesis (interferometry) will get it impressively close.

After all, a steerable and perfectly-formed 1000m dish is – at least in 2012 – a practical impossibility, especially here on earth, where it would be subjected to the forces of gravity, weather and budget.

Over the weekend, the SKA Organisation, a not-for-profit headquartered out of Manchester, England, announced the final plans for the actual construction of the project.

The original concept called for a choice between South Africa and Australia (with New Zealand) as the location.

A dual-hosted solution was ultimately ratified. South Africa was identified as the preferred site, and now gets the lion’s share of the grid; Australia and New Zealand will also build and host part of the grid, thus extending its baseline (its theoretical aperture) to 3000km.

The construction project will be completed in phases, with 10% finished by 2019 and the rest by 2023. This will let astronomers start producing their first results sooner.

According to the SKA Organisation:

* SKA will be 50 times more sensitive and 10,000 faster than the current best telescope.

* The telescope will address fundamental unanswered questions about our Universe, including how the first stars and galaxies formed after the big bang.

* SKA will generate 10 gigabytes of data per second.

To put this into perspective, the fastest computer right now is the Japanese juggernaut “K”, which can just sneak past 10 petaFLOPS on a good day, at maximum load, with a following wind.

Calling “K” a computer is something of a terminological simplification: it consists of 705024 CPU cores, fills 800 racks in a 50m x 60m pillarless room and has 1000km of cabling. At peak load, it uses 20MW of power.

Clearly, just the calculating-machine requirements of the SKA project are a bold undertaking – and that’s before you start building thousands of individually-steerable radio dishes in the middle of the desert, as far from unwanted electromagnetic emissions as possible.

Oh, and before you take into account the computer security requirements of a computer system of that magnitude!