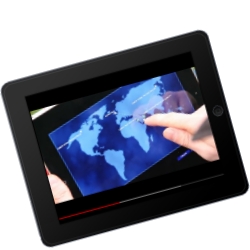 Although there is the potential to earn a fortune through your criminal endeavours, you risk being brought to justice by the authorities and serving many years on a diet of bread and water.

But there is at least one way you can experience the thrill without breaking the law.

Uplink, created by British firm Introversion Software, has been simulating the thrills-and-spills of cinematic computer hacking for over ten years, entertaining players on Windows, Mac OS X and Linux. And now it’s available for the Apple iPad too. Play the game, and before you know it you will be breaking into classified computer systems, stealing data and covering your tracks, all without having to worry about Scotland Yard or the FBI knocking down your door at 4am.

It seems to me a clear indication of just how mainstream the notion of computer hacking has become in today’s society that a video game like this can make the jump to a mass-market product like the Apple iPad. All those who argue that it was curiousity and intellectual challenge that drove them to break into computer systems, might be better off spending hours progressing through Uplink’s missions than breaking the law.

And I would love it if more of those with the talent to do so, turned their back on computer crime and used their IT skills in a positive, creative, constructive way instead.

Learn from the mistakes of others who have ended up in prison because they took the dark path of cybercrime. Instead of breaking the law, write a computer game like Uplink, build a cool website like Twitter, develop a password management utility that helps people.

Limit your malicious hacking to entertaining games like Uplink. At least there you’re not doing any real harm, and aren’t going to end up behind bars.

If you have played Uplink, leave a comment below telling us what you think of the game