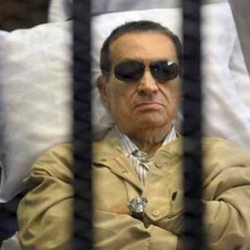 Hosni Mubarak, the disgraced former president of Egypt, may be seriously ill in jail, but – at the time of writing – he isn’t dead.

If you had turned to Twitter earlier today, however, you might have been fooled into believing that Mubarak – who is serving a life sentence – had died, after some users were apparently duped by a bogus Twitter account.

One of the accounts which spread the news of Mubarak’s alleged death (fortunately they did say “unconfirmed”) was the foreign desk of the British Sunday Times newspaper:

The reports of Mubark’s alleged death appear to have emerged from a Twitter account claiming to belong to Egyptian Interior Minister Mohamed Ibrahim. However, the Twitter account had only been created an hour before the announcement of the “death”, calling into question its authenticity.

As with the previously announced “deaths” of Margaret Thatcher and Mikhail Gorbachev and even 1980s pop star Adam Ant, there isn’t any truth in the story.

Fortunately the Sunday Times, was quick to post a correction. But others are still perpetuating the false news of Mubarak’s death.

NBC’s Richard Engel actually went to the effort of confirming with the Egyptian Interior Ministry that it was not responsible for the tweet:

#egypt mubarak death appears to be a rumor, min of interior denies issuing a report, says has 'no info' on death

For those who are following the story, the latest news from AP is that Mubarak’s condition has stablised, and that his heart and blood pressure are being monitored. Although he hasn’t passed away, he is clearly not a well man.

Those of us who are interested in computer security know all too well the importance of not believing everything we read, not rushing to click on a link nor open an attachment without thinking about the possible consequences. Maybe some Twitter users could learn that lesson too.