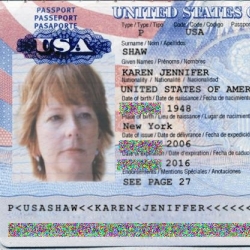 Chances are that you see your fair share of email scams.

You know the kind of thing – “you have won a Euro lottery” (not that you ever entered it), “you have been identified as the heir to a gigantic fortune” (not that you’re really related to the deceased individual) or simply “millions of dollars have fallen into our lap following the death of Libya’s Colonel Gaddafi, would you look after it for us?”

Normally I simply delete the emails. But a couple of weeks ago I received an email from “Karen Shaw” and decided to respond.

Here’s what the email said: Although she didn’t reveal it in her opening email, a subsequent conversation revealed that Karen had a financial problem. Although she was waiting to receive 10 million dollars that were owed to her, she had to clear her husband’s debts first.

Reading between the lines, it sounds as if Karen will give me some money if I will simply help her pay the £15,000 debt. What’s more, even though I haven’t asked for it, Karen has also scanned and attached a copy of her passport.

Obviously I have no way of knowing if that really is the passport of the person emailing me, whether it has been Photoshopped or is simply a passport that has been stolen from an innocent member of the public. I’ve pixellated some of the information just to be on the safe side.

It was round about this time that Karen’s solicitor got in touch. He emailed me saying he was representing Karen in the upcoming transaction, and declared that his name was “Churchill Spencer”. Not only did Churchill Spencer demonstrate that he was a master at Microsoft Word, but he seemed to also be someone who I could put my trust in, as his name rang seemed to ring a vague bell and have an air of authority about it.

Although I suggested Mr Spencer get in touch with my legal team (“Chamberlain Neville” of Abingdon), I ultimately decided not to pursue the opportunity.

And you shouldn’t either. If someone contacts you out of the blue, offering you something which sounds too good to be true – it almost certainly is.

You may not fall for a scam like this, but you may know elderly or vulnerable people who would. Please look out on their behalf, and help them not to make a very expensive mistake.

Update: Thanks to Naked Security readers who pointed out that the image in the passport is that of Australian Prime Minister Julia Gillard. As @Madincroydon points out the very same picture can be seen in this news story from 2009 about Gillard’s trip to India.

9 comments on “Is this *your* passport being used by email scammers?”