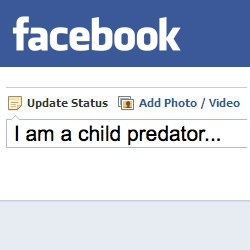 Starting August 1, convicted child predators and sex offenders in Louisiana not only have to register with the local authorities, such as police and schools, they will also be required to post their crime on their Facebook page and other social networking profile pages, according to Reuters.

The state seems to be forging a new path when it comes to laws about disclosure.

And the punishment for affected offenders who do not comply with this law is steep: two-to-ten years years without parole in a hard-labour prison.

Now if you are familiar with Facebook’s terms and conditions, you will know that this issue should already covered be with the statement

"You will not use Facebook if you are a convicted sex offender."

But as you can see in the screenshot below, this statement is nestled among other requirements that I am sure more than a handful of users ignore. Some might see this bill as a way for Louisiana to keep a closer eye on sex and child predators.

Or, perhaps Louisiana doesn’t actually expect any convicted sex criminal to comply at all. Think about it, if these offenders were law-abiding citizens by nature, they probably wouldn’t be convicted criminals.

So, maybe the new legislation is actually there as a just-in-case measure: should a sex offender cause even a sniff of trouble – and hasn’t complied with the law by declaring their sex offender status on Facebook – the authorities have a significant punishment up their sleeves. With users reluctant to announce they they are sex offenders, this could be an effective way of driving predators offline.

The flipside might be of concern to some: if convicted sex offenders do comply with the law and post their status on Facebook, what kind of reaction would that status incite in the neighbourhood?

We all know that sex crimes, particularly those that involve children, are difficult for many of us to deal with, let alone forgive. Is it possible that Louisiana might have more unrest by demanding compliance with this law?

I guess we will just have to wait and find out how it all pans out. It certainly will be interesting to see if other city and state governments follow suit.