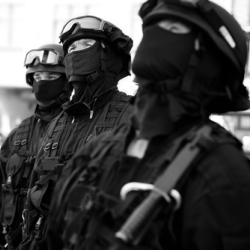 Is your home WiFi network left open for anyone to use? Maybe this staggering story from America will make you think twice as to whether that’s a good idea.

After spotting threats posted online, a heavily-armed police SWAT team broke down the door of a house in Evansville, Indiana, smashed windows and tossed a flashbang stun grenade into the living room where an eighteen-year-old girl and her grandmother were watching the Food Network.

Can you imagine how terrifying it must have felt to have been in that room when the grenade was thrown in, and the house stormed by police with their guns drawn?

Oh, and just a small detail – the police had the wrong house. The home had an open WiFi connection, which meant that it could be used from an outside location.

The dramatic events were helpfully captured on video, as the police had invited the local news station to record the raid (presumably their intention was to show themselves in a good light, rather than making a massive goof).

I’m not American, and don’t live in America, so maybe you think I’m not entitled to ask this question, but I’m going to ask it anyway: What on earth is going on? Has the world gone entirely barking mad?

Okay, that out of the way – let’s get on with the story…

The somewhat rattled Stephanie Milan and her family were released without charge once the mix-up became obvious, and police looked further afield for the culprit who had posted messages like the following online:

"Cops beware! I'm proud of my country but I hate police of any kind. I have explosives 🙂 made in America. Evansville will feel my pain."

With a second suspect identified at a different house on the same street, police took a more softly-softly approach. This time not using a SWAT team or grenades, but instead using the tried-and-trusted traditional method of knocking on the door.

You would like to imagine that the authorities understand that many people still have poorly secured WiFi networks in their home, which can easily be exploited by people causing mischief, sending pornographic spam or even terrorist-related emails.

The Milans’ door and window are now being repaired at the city’s expense. And presumably the family are taking steps to secure their WiFi connection.