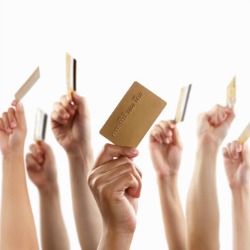 Identity thieves of the world unite… a Twitter account has just made things a whole lot easier for you.

The account, @NeedADebitCard, names, retweets and shames those Twits who post pictures of their credit or debit cards on the social networking site.

With its bio listed as “Please quit posting pictures of your debit cards, people”, the account has gained over 5000 followers in a little over a month.

Some people have at least attempted to obscure some of the information, by using a strategically placed thumb or, in one case, black marker pen. But others haven’t even done that.

Take Jamie B, for example. He’s just cut up his debit card to stop him spending any money.

And it’s important that the whole world knows, right? Just cut my debit card in half because I have decided that money will not rule my life...

Then there’s Dana K who, after cutting his debit card into 24 pieces, has now stuck it back together and posted the picture for all to see. Cut my debit card up and then put it back together, took a good 10 minutes

What is going on here? Is it really that important for you to post that picture that you’d risk identity theft? How interested are your genuine online friends in a picture of your bank card anyway?

Putting up a picture which features all your bank card information is like giving thieves a good chunk of your identity jigsaw puzzle. If someone who had seen your photo then decided to follow you – and look you up on other social networking sites – they could start to build up more details about you and add missing pieces to the puzzle.

And while most online services require the three-digit security code on the back of the card, not everyone asks for it.

Some of the pictures have now, wisely, been deleted, but that doesn’t stop new ones being posted today, or tomorrow.

If it’s not obvious enough already, it really isn’t a good idea to post any of your personal information online. And that includes photos. Especially ones that help the bad guys steal money from you.