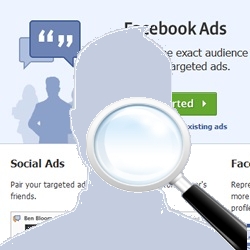 If so, get ready to start seeing ads in your mobile device’s Facebook News Feed that will be targeted based on your mobile app usage.

Here’s how it will work, according to the Wall Street Journal: if you like to play Zynga Inc.’s “Words with Friends,” your mobile News Feed will soon target you with ads for yet more Zynga games.

If the WSJ’s sources are correct about all this, the new ads will represent a boundary-breaking move for an ad-delivery company, given that none has thusfar tracked consumers on the basis of mobile app usage.

The ads will be enabled by the Facebook Connect feature, which lets users easily log in to third-party sites, applications, mobile devices and gaming systems with their Facebook identities. Sources familiar with Facebook’s plans told the WSJ that the company is launching a new type of mobile advertising that will target consumers based on what apps they use, “pushing the limits of how companies track what people do on their phones.”

The unnamed sources told the WSJ that beyond tracking consumers’ use of mobile apps, Facebook is also pondering whether to track what people do on those apps. That move would be an even bigger game-changer. As it now stands, mobile-ad networks only target consumers based on what ads a person clicks on from his or her mobile browser.

Both Apple and Google track their users’ mobile apps, but neither company tracks what people do in those apps.

One of the WSJ’s sources said that Facebook will charge advertisers every time an app is installed on a user’s smartphone.

That’s a highly profitable prospect, the WSJ noted, for obvious reasons – i.e., a heck of a lot more consumers download apps than click on ads:

Facebook can charge significantly more for an app installation than it can for the traditional cost of every one thousand people who have viewed an ad.

The WSJ quoted Justin Brookman, director of the Center for Democracy and Technology’s project on consumer privacy, who noted that consumers just aren’t used to having ad companies peering over their shoulders every time they use a mobile app:

"Once you're signed in, are you really expecting that Facebook is going to be watching you while you're on there?" Of course, with the post-IPO Facebook now under the gun to monetize features such as Facebook Connect, it’s hard to imagine that the company won’t track what people do in their mobile apps.

What would that look like? The possibilities are limited only by our activities while using mobile apps.

Searching for experts in a given field – say, infosec! – in LinkedIn, for example, would open up whole new worlds of targeted advertising.

One of the WSJ’s sources said the new ads might be announced on July 16, unless privacy concerns convince the company to hold off on mentioning it until Chief Operating Officer Sheryl Sandberg conducts the company’s first earnings call with analysts on July 26.

The new ads would then launch on July 30, the source said.

If you want to learn more about privacy and security on the social network and elsewhere on the internet, join the Sophos Facebook page.

What do you think of Facebook’s plans to target adverts in this way? Let us know by leaving a comment below.