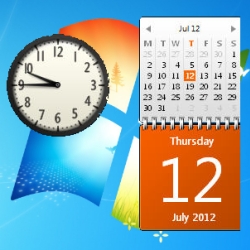 Users of Windows Vista and Windows 7 have been advised to completely disable their Windows Sidebar and Gadgets, in response to what appears to be a serious security risk.

The Windows Sidebar is a vertical bar that can appear at the side of your desktop, containing mini-programs (known as gadgets) that can provide a number of functions such as a clock, the latest news headlines, weather report and so forth. A security advisory issued by Microsoft’s security team advises that vulnerabilities exist that could allow malicious code to be executed via the Windows Sidebar when running insecure Gadgets.

The warning comes ahead of a talk scheduled for Black Hat later this month by Mickey Shkatov and Toby Kohlenberg. Shkatov and Kohlenberg’s talk, entitled “We have you by the gadgets”, threatens to expose various attack vectors against gadgets, how malicious gadgets can be created, and the flaws they have found in published gadgets. "We will be talking about our research into creating malicious gadgets, misappropriating legitimate gadgets and the sorts of flaws we have found in published gadgets."

If the researchers have managed to find ways to exploit existing gadgets that’s particularly worrying.

Clearly Microsoft is worried about the security researchers’ findings, and has issued a “Fix It Tool” which will protect Windows 7 and Vista users by entirely disabling the Windows Sidebar and Gadgets functionality.

Which is bad news if you found those sidebar gadgets useful. You better find a new way to tell what time it is, or catch the latest from your favourite RSS feeds.

Sorry if it causes you any pain, but I would recommend you follow Microsoft’s advice if you run Windows 7 or Vista and apply their “Fix It tool” as soon as possible. It may be a sledgehammer to crack a nut – but it’s a nut that needs smashing, and fast.

Interestingly, Microsoft has dropped Gadgets from the upcoming Windows 8. In retrospect, that was probably a very good idea.

Did you use Gadgets in your Windows sidebar? Will you miss them? Leave a comment below and let us know if you found them useful, or whether you won’t be mourning their demise.