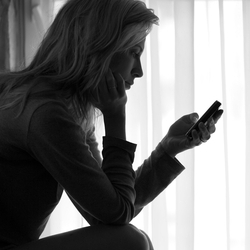 A minor miracle occurred early last year when the FBI tried to shake down a phone company for customer records during an investigation: the company said no.

According to the Wall Street Journal, the affair has been dragged to court and is tightly cloaked in secrecy.

The phone company’s lawyer declined to identify which phone company he’s representing, while the telecom employee who received the FBI’s national security letter (NSL) demanding customer records has been legally barred from acknowledging either the resulting court case or the letter’s existence to just about anyone beyond the company’s lawyers.

When the phone company received the NSL early last year, it chose to fight it in court.

That right there is just about unheard of.

NSLs, on the other hand, are a type of subpoena that requires neither a judge’s oversight nor even probable cause.

What’s particularly appealing about NSLs, from a surveillance perspective, is that they come with their own cloaking devices in the form of gag orders that prevent letter recipients from disclosing that the letter was ever issued.

As Wired reported in May, there have been only four challenges to the gag order part of NSLs since 2009, when a court mandated that the FBI tell recipients that they had a right to resist the gag.

The Electronic Privacy Information Center (EPIC) reports that in 2011, the FBI sent 16,511 NSLs for information pertaining to 7,201 people. When the anonymous phone company took the NSL to court early last year, the US Department of Justice turned around and counter-filed, claiming that the company’s refusal to hand over its files amounted to interfering “with the United States’ sovereign interests” in national security, according to the WSJ.

After some digging through court papers, calling likely telecoms and cross-referencing Federal Communications Commission records of telecom firms, the WSJ is hypothesizing that the “just say no to NSLs” telecom is Working Assets Inc., which runs a San Francisco-based telecom subsidiary called Credo and which devotes part of its revenues to liberal causes.

Credo CEO Michael Kieschnick would neither confirm nor deny to the WSJ that his company was involved in the case, but the statement he gave regarding his firm’s attitude toward these types of government requests is telling:

"There is a tension between privacy and the legitimate security needs of the country. We think it is best to resolve this through grand jury or judicial oversight."

The telecom – be it Credo or some other company – is fighting the NSLs on constitutional grounds (here are the court papers [PDF]), arguing that the gag orders improperly restrain speech without a judge’s authorization.

For its part, the FBI maintains that NSL secrecy is necessary to avoid tipping off potential terrorists.

For my part, just the notion of Credo possibly being the telecom who said “No” spikes my interest in the company.

According to its site, in 2011 the company fought for Medicare, Planned Parenthood, marriage equality, workers’ rights, environmental protection, and prosecution of Wall Street crimes.

This is no plug, paid or unpaid, for Credo. But it’s interesting to note that liberal causes like these tend to provoke sharp interest from law enforcement bodies.

When those law enforcement bodies come knocking with NSLs, looking to pore over customer activities without a judge’s approval, it’s good to know that even a handful of companies don’t roll over and show the government their tender underbellies.

Kudos, anonymous telecom. Thanks for kicking up some dust over these data demands.

As for the majority of companies that do comply without a fight, please remember that you have the right to say no.

9 comments on “Telecom firm says “No” to FBI surveillance demands”