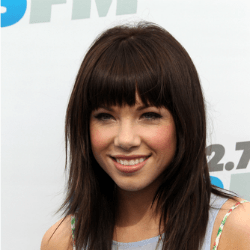 # Hey, i don’t know you
And this is crazy
But i’ve nicked your photos
I’ve hacked you baby #

Carly Rae Jepsen – yes, her of the “Call Me Maybe” (potentially one-hit-wonder) song-of-the-year-so-far – has lodged a complaint to the Vancouver Police Department after allegedly having naked photos stolen from her personal computer.

According to TMZ, Jepsen went to the Vancouver Police Department about a possible hacking situation back in March.

"We began an investigation. That investigation is into the unauthorized use of a computer, theft of telecommunications and the criminal harassment of Miss Jepsen."

"At this time, one suspect — an adult male — has been identified. He has not been arrested, he has not been charged and the investigation is continuing."

Poor old Carly, it was only on Monday when she took to Twitter to deny that a sex video of someone who looked remarkably like her was actually, in fact, not her.

"Crazy morning. Discovered that someone put up a sex tape claiming to be me. Ridiculous. Obviously not me."

And now she joins the likes of Scarlett Johansson, Mila Kunis, Christina Aguilera, Lady Gaga and Miley Cyrus who have also all fallen victim to cybercriminals.

Celebrities may have chosen to be in the public eye, but they deserve some level of privacy, especially when it comes to private files stored on their personal computers.

But, like the rest of us, they are capable of being a bit neglectful when it comes to computer security.

So, celebrities, if you’re reading this – if you must take naked pictures of yourself, at least store them securely. Or perhaps take the advice that we gave Mila Kunis.