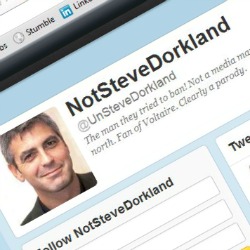 Some tweeters are calling it the death of parody.

Northcliffe Media has taken legal action in a California court to force Twitter to reveal the parodist’s identity.

The charges are computer fraud and abuse, data access and fraud, and defamation and online impersonation.

They stem from a series of tweets that make fun of the working practices of Steve Auckland, the CEO at Northcliffe Media, the Daily Mail & General Trust’s regional paper wing.

The information posted on Twitter couldn’t be known publicly, according to court filings.

The court papers, which have been posted on the Guido Fawkes blog, charge the defendant with hacking the newspaper group’s email to access such information.

Here’s a quote from the court papers:

At least some of the information made public on Twitter by the defendant was not known publicly. … And on information and belief, the only way that such information could be obtained was by hacking into an email account at the plaintiff's [Northcliffe] business.

The court papers go so far as to accuse @UnSteveDorkland of spying on employees to get his information and report that his alleged actions had made employees “fear for their safety”.

Northcliffe hasn’t specified which tweets it’s talking about, although the BBC talked to one source who said that some of the tweets were “homophobic”.

The @UnSteveDorkland account holder told the BBC that he denies all of the accusations.

For its part, Twitter planned to comply with a court order and reveal the user’s identity tomorrow, August 1st.

That might be delayed, however. The Guido Fawkes blog reports that a pro bono attorney representing the spoofer planned to file a motion on Monday to quash the unmasking.

The account identifies itself as “clearly a parody”. It’s hard to imagine how charges of online impersonation could possibly stick.

But charges of hacking? Of data access and fraud?

The newspaper group wanted this tried in front of a jury, which is why the case was filed in a California court, where Twitter is based.

If the parodist is found guilty of computer fraud, illegal data access and stalker-like employee surveillance, let the weight of the law fall upon him.

If he was unleashing hateful, homophobic information that no legal means could have secured, let justice be done.

Otherwise, if all we’re looking at is a newspaper group executive smarting over simple spoofing, shame on them for wasting everybody’s time and persecuting somebody who was acting within his rights.

Forbes’s Tim Worstall said it well: just grow up. Or grow something, at any rate.

Steve Auckland needs to grow a pair and realise that having the mickey taken out of you is just part and parcel of being a well paid senior executive.

As Worstall points out, there might be grounds for defamation under UK law, but things change considerably across the pond.

And if the newspaper company really believes that the only way you can find something out is by illegally accessing email accounts, somebody’s in la-la land about the fluid nature of data.

Who knows? Maybe @UnSteveDorkland is a crack hacker.

Or then again, maybe he just knows how to get information by talking to people.

Perhaps the tweets, when we know which ones are at the heart of this, will help to tell the true tale.