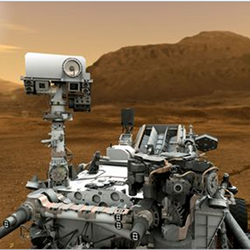 Curiosity has landed on Mars.

Congratulations to NASA and the Jet Propulsion Laboratory!

Crashing into a planet-sized object will do it in an instant.

But shedding that sort of speed and landing automatically and safely, through more than 120km of Martian atmosphere, within a 20km target zone, is an astonishing accomplishment.

For those of us charged with more modest-sounding tasks, such as releasing terrestrial software updates which work reliably, let’s take this as evidence that you can produce software which works correctly on its first outing “in the wild”.

And for those of us charged with delivering or receiving updates over the internet – and don’t we love to complain about bandwidth and latency, no matter how much we have of the former, and how little of the latter! – let’s spare a thought for the Mars Science Laboratory team.

The Mars Rover’s direct-to-Earth data rate peaks at 32kbits/sec. In off-peak periods, the rate is as low as 0.5kbits/sec. As for latency, the round-trip distance is currently just under 28 light minutes, or roughly a light half-hour.

Gives a whole new meaning to the word ping.

9 comments on “Mars Rover Curiosity touchdown – and you think you’ve got latency issues!”