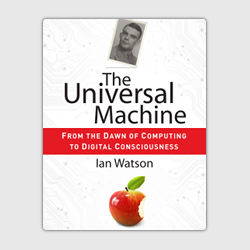 This time, we take a look at The Universal Machine by New Zealand computer scientist and author Ian Watson.

With the subtitle From the dawn of computing to digital consciousness, this book starts with Charles Babbage and ends with the US military’s latest Reaper drones, tracing a fascinating history of the development of computers and computer science from the Regency and Victorian eras to the present day.

Watson is a huge fan of Alan Turing (as, indeed, is Naked Security), and the book arrived with a covering letter from the publisher headlined Living with the legacy of Alan Turing.

Nevertheless, the author doesn’t let Turing dominate the book, and makes sure that a whole raft of colourful characters and computers get their chronological look-in.

This book fits, by design, into the category often called “popular science.” That means it isn’t technical, so it’s accessible and readable even to non-geeky types, written as it is in an easy-going and engaging style.

At the same time, it’s also an enjoyable read for hard-core techies: you’ll almost certainly keep running into computers and engineers you haven’t heard of before. (Or, if you have heard of them, you’ll be thrilled to know that they’ve at last got a mention in a popular history of computing.)

From the full-length portrait of Ada, Countess of Lovelace, through a discussion of Apple’s original corporate logo, to the marketing material for the Honeywell Kitchen Computer (with integrated chopping board – I kid you not), I found myself regularly smiling to myself and saying, “Ha! Will you look at that!”

A really neat touch, which I found both useful and enjoyable, is the eight-page biographical appendix, “Where are they now?”

Here, the author presents a short paragraph on each of 53 people or groups he’s just covered, noting that:

As I was finishing this book, I realized that you might want to know what has happened subsequently to some of the characters I wrote about; after all since the history of the computer is quite recent many are still alive. Ian Watson obviously had a lot of fun researching and writing this book, and I think you’ll enjoy reading it.

It’s not exactly a bargain at US$25 for the paperback version, but it’s the sort of book you’ll be able to get the whole family to read – and that’s a strong endorsement for a popular science offering.

I do have a small gripe about The Universal Machine, and it’s aimed at the publisher, Copernicus Books, an American subsidiary of the Springer-Verlag group.

Guys, do your author a favour and give this book a thorough dose of editorship for its second edition! It’s littered with niggling errors which an author – accustomed as he is to the text of his own work – shouldn’t be expected to spot by himself.

The unevenness in punctuation was especially annoying. Pick a style and stick to it. Don’t parenthesise subordinate clauses some of the time, as I have done here, but leave out one or both of the commas at others.

A good editor would have licked the orthography into shape, and would also have emended various factual inconsistencies. Windows 3, for example, couldn’t have been released in 1990 and 1991, and the first pizzas you could order online were either from Santa Cruz or Santa Clara, not both. Oh, and an index would have been handy, too.

Do these flaws detract from the book to the point that you won’t enjoy it? I doubt it.

As soon as I’d finished it, I found myself wanting to read it again. So I did.

Our review copy of this book was provided free of charge by Springer.