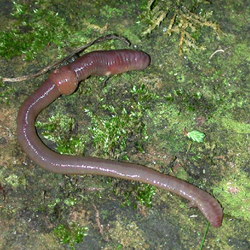 That headline got your attention, didn’t it?

Fortunately – or unfortunately, depending on your opinion of the viability of malware-as-military-ordnance – we’re not talking about worm as in virus here. We’re talking about worm as in lumbricus terrestris (or worm as in worm, to you and me).

That’s right: a gaggle of researchers from MIT, Harvard and Seoul National University have made international headlines with a technical paper about an earthworm-style robot, apparently bankrolled by DARPA, and published in the IEEE/ASME Transactions on Mechatronics.

You’re not likely to read the catchily-titled Meshworm: A Peristaltic Soft Robot With Antagonistic Nickel Titanium Coil Actuators – with the paper costing $31 a look, you’d have to be pretty keen on cybernetic peristalsis – but we can at least show you an image here on Naked Security, thanks to MIT’s publicity department.

(If still images don’t do it for you, MIT has a video of the worm in action. But don’t get too excited: the worm peaks at speeds of 0.005 metres per second. Usain Bolt, for what it’s worth, is more than 2000 times quicker – though, to be fair, he doesn’t have to wriggle along on his belly.)

So far, the worm is powered and controlled externally, so it’s not capable of autonomous operation – so no chance yet of hackers hijacking it “in the wild”, as it were.

Nevertheless, there’s some fun technology in there.

I can’t see the manufacturers of wheeled and tracked military vehicles quaking in their commercial boots just yet. But maybe – just maybe – this invention heralds the creation of a robot vacuum cleaner which can get under the couch and doesn’t get stymied every time it comes across a corner.