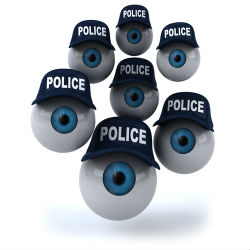 As I write this, WikiLeaks.org is still offline.

According to several reports, it has been suffering a massive distributed denial-of-service (DDoS) attack since August 3rd. WikiLeaks says the DDoS is flooding the site with ten gigabits of requests every second.

The attack came after WikiLeaks published the latest of its Global Intelligence Files (GIF), discussing the implementation of TrapWire in public spaces in the US.

TrapWire is a surveillance system that makes use of real-time facial profiling to search databases of red-flagged individuals.

There is a lot of hype out there about TrapWire. Articles like this one from a popular English news site does little to calm those prone to panic.

Thing is,TrapWire’s website seems pretty upfront about what its technology does:

TrapWire is a predictive software system designed to detect patterns indicative of terrorist attacks or criminal operations. Utilizing a proprietary, rules-based engine, TrapWire detects, analyzes and alerts on suspicious events as they are collected over periods of time and across multiple locations. Through the systematic capture of these pre-attack indicators, terrorist or criminal surveillance and pre-attack planning operations can be identified -- and appropriate law enforcement counter measures employed ahead of the attack. As such, our clients are provided with the ability to prevent the terrorist or criminal event, rather than simply mitigate damage or loss of life. (According to the Sydney Morning Herald, “the page on TrapWire’s website outlining its executives and their links to the CIA has recently been removed.”)

I doubt any dissenter is surprised that the technology exists – it’s more that the system is actually in use and they weren’t aware. This surveillance approach, which is considered “more accurate than modern facial recognition technology”, has been installed across the US without the public’s knowledge or approval. According to RT.com’s in-depth article, TrapWire has been implemented “in most major American cities at selected high value targets (HVTs) and has appeared abroad as well.”

A colleague said this was all a bit reminiscent of the FBI’s 1997 Carnivore software, the packet sniffer designed to read online communications among suspected criminals, terrorists and spies.

I don’t think anyone is really surprised that the governments and authorities are quietly using the latest technology to monitor the activities of its people, saying that they are doing this for our general safety.

But with every new surveillance technology that is implemented, personal privacy is further eroded. And the question we all need to ask ourselves is this: What do we value more – privacy or state security?

Sadly, it seems that we cannot get both.

9 comments on “WikiLeaks.org is crippled under a massive DDoS. Is the TrapWire leak to blame?”