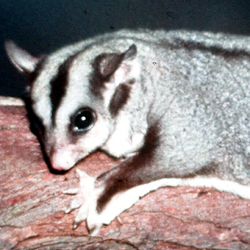 Earlier this year, video footage captured by a stormwater engineer in Tasmania, Australia, went viral when her pipe survey robot came across one of Australia’s stockiest, stumpiest but most reclusive mammals: a wombat. Not to be outdone in the cuteness stakes, Australia’s biggest ISP, Telstra, has just published a field report from some of its own engineers who came across a family of potential network hackers in a cable pit in South East Queensland. Squirrel gliders – so called because they can glide over 50 metres between trees thanks to a membrane of flesh between their front and back legs – are omnivorous and have long, sharp lower incisors, perfect for gnawing through network cables.

Of course, squirrel gliders shouldn’t really be living in a cable pit – their natural habitat is up in trees, as you might expect – so the Telstra engineers were quickly able to get approval from the network change control committee (better known as the Department of Environment and Heritage Protection) to relocate the creatures.

Network integrity was maintained, a potential denial of service attack was thwarted, and the squirrel gliders moved into a brand new housing box installed well above ground on a nearby utility pole.

For once, a hacker story with a happy ending!
–