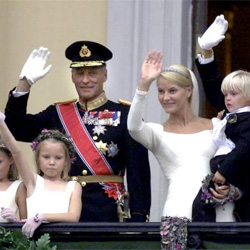 The secret life of the Norwegian royal family has been on display for anyone with an Instagram account after the son of the country’s Crown Princess was found to be over-sharing photos of family holidays and other events, according to media reports.

Marius Borg Høiby, the 15 year-old son of Crown Princess Mette-Marit, had been posting the photos on a personal Instagram account. The photos included GPS information that could reveal the location of the royals – a major security lapse.

Høiby is the son of Crown Princess Mette-Marit from a relationship prior to her marriage to Norwegian Crown Prince Haakon. He is the half brother of their two children: Princess Ingrid Alexandra and Prince Sverre Magnus, royal heirs to the Norwegian throne.

Høiby’a Instagram account was public for close to a year, with the teenager posting frequent photos of himself and his family on holiday and in other informal settings. The photos were also shared with Høiby’s Instagram contacts.

The teen shared 133 photos, including pictures of the family at the Royal Palace in Oslo and on vacation. He also divulged information on the family’s location and planned travel, according to reports.

The incident has caused a minor scandal in Norway, where the media and security officials were quick to declare it a dangerous breach that could have put the family’s physical security at risk. Fingers pointed at Norway’s police intelligence unit, the Politiets sikkerhetstjeneste (PST), for failing to properly inform the family about the risks in social media. In it, she noted that the Instagram account had been removed, but questioned the media uproar over the leaked photos. The family’s movements and residences were a matter of public record, Mette-Marit argued, so Høiby’s photos revealed little information that wasn’t already known.

But the incident has fed into an already simmering debate within Norway about what some see as the government’s lax attitudes about public safety. This, following the mass murder of 77 people in Oslo and the island of Utøya in July, 2011 by far-right nationalist and paranoid schizophrenic Anders Behring Breivik – an incident that continues to command headlines.

Geo-tagging is a common feature of most modern cameras, including cell phone cameras. The GPS coordinates in photos can be easily read and displayed using image editing tools or on photo-sharing sites like Flickr, which extract the GPS data from digital photos and map photos to their real world locations.

In a story published today, Naked Security contributor Paul Ducklin posted a photo of the daily specials board at an unnamed restaurant in his home town of Sydney, Australia. He challenged Naked Security readers to name the restaurant and give its address. In a matter of hours he had his answer – from Adrian in The Netherlands, who used an online photo processing tool to extract the location data.

The easy accessibility of location data poses a big problem for consumers and for security conscious organizations.

The US and British military have restrictions on the use of mobile phones in war zones. Earlier this year, the US Army warned about the dangers of geo-tagging by soldiers, as well.