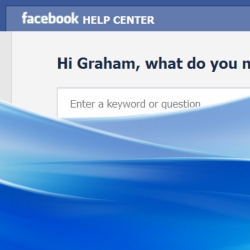 Spammers have overrun the Facebook Help Center, clogging up the social network's self-help support forum to such an extent that it has become effectively useless.

As you can see from the screenshot below, it’s hard to find genuine questions and answers in the Facebook Help Center when it’s flooded with spam messages: The Help Center’s “Search” section is particularly badly hit, but there are also threads of spam messages elsewhere in the community forum.

Here’s an example of one spam messages posted on the site, advertising a service which claims to offer streaming coverage of an international cricket match: "Of course I have reported many as "spam" and I have sent one of the generic feedback forms, but I have little confidence that Facebook will even notice. Is there something that you can do, as a recognized organization with a presence on Facebook to let Facebook know of this nuisance?"

By the way, this isn’t the first time that spam has become a problem in the Facebook Help Center. Last November we reported a very similar attack.

As more and more people spend time on Facebook, it becomes an ever more attractive environment for spammers to try to spread their messages. Facebook’s developers need to work hard to keep the community safe, blocking as much spam proactively as possible, and the site’s security team needs to keep on the ball when offending messages are reported to them.