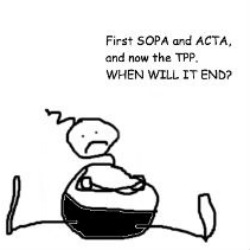 Remember the furore surrounding SOPA/PIPA in the US, or ACTA in the EU? It seems like acronym-tagged agreements with far-reaching IP agendas are causing quite a stir this year.

Now there is a new one to watch out for: TPP, the Trans-Pacific Partnership Agreement Intellectual Property Chapter.

This multinational ‘free trade’ agreement has been under secret negotiation since 2008. Nine Pacific nations are at the table, including the US, Australia and New Zealand. It includes provisions that extend intellectual property protection and enforcement on an international plane.

And yes, you should care about it.

The US-based digital rights advocacy group, the EFF, says that this approach could ‘choke’ individual free speech, innovation, privacy and digital rights. They have even created an infographic, a small part of which is displayed below. In particular, the EFF highlights Article 16, which wants signatories to find legal incentives to get ISPs privately enforcing the TPP copyright protection rules.

This may see countries rolling out:

Working on the basis of allegations (not proof), mandating surveillance, blocking and filtering to protect IP rights, and having non-transparent and unaccountable ISPs as both police and arbiter, the negative impact to the individual is not hard to see.

Another big issue with the TPP is that it seeks to extend the copyright term beyond the international standard of 50 years after the death of the author.

It wants to slap on an extra 20 years, taking the total up to 70 years after death.

Many people already object to copyrights being extended, as it deals a blow to new works entering the public domain. Some even say that it is bad for creativity, innovation and culture generally. Canadian Law Professor Michael Geist has noted that the TPP could see great literary works – like those by John Steinbeck, JRR Tolkein and CS Lewis – shackled by copyright for yet another generation.

Like ACTA, TPP is a ‘trade’ agreement being secretly negotiated behind closed doors. This protects the US-led corporate lobby from sufficient public scrutiny, leaving them to push agenda items, like copyright term extension, into an international agreement.

Back in May, a letter from 30 academics demanded more transparency in the process.

And just last week, a group raised a bounty of $17,000 to get their hands on a copy of the negotiating texts.

The demand for more democracy and transparency is easy to understand. ACTA showed that trying to push such agreements on the quiet doesn’t work. And people don’t like being shut out of negotiations.

The irony of trying to have secret negotiations is that civil society’s participation and viewpoints might just help restore the balance, turning what many see as detrimental decisions into more palatable ones.