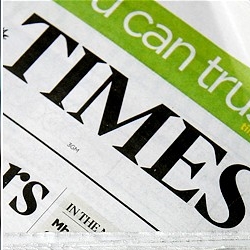 A former journalist with The Times has been arrested in connection with an alleged hack of a blogger’s email account in 2009.

28-year-old Patrick Foster was arrested in the early hours of the morning by British police, investigating the hacking of an email account belonging to the anonymous police blogger Nightjack in 2009.

However, the Leveson Inquiry was told earlier this year that not only had Foster hacked into the email account of the police blogger, but also The Times had fought its battle in the courts to unmask the NightJack blogger *after* its reporter had admitted his offence to the paper’s management.

Editor James Harding apologised earlier this year to the inquiry into press standards, saying that he regretted the intrusion and expected “better of The Times”.

Meanwhile, the outed blogger, Richard Horton, has launched a civil action against The Times for breach of privacy and deceit.

Foster is the 11th person to be arrested as part of Scotland Yard’s “Operation Tuleta” investigation into alleged computer hacking by the media, and is also being questioned over conspiracy to pervert the course of justice.