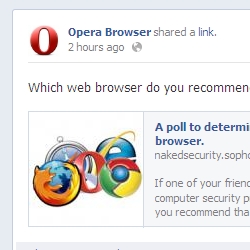 An online poll conducted on the Naked Security site has come up with an interesting finding: Opera, a relative minnow in the web browser market, is reckoned to be a more secure browser than the likes of Google Chrome, Mozilla Firefox and Internet Explorer.

We were interested in discovering which browser our readers would recommend to friends or family who had suffered a computer security problem.

The poll opened on the morning of Monday 3rd September, and saw Chrome and Firefox take an early lead with Internet Explorer, Safari and Opera lagging far far behind.

Everything changed yesterday, however, as Opera surged in its share of the vote. The Norwegian browser – which had earlier only been receiving less than two votes every hour suddenly was receiving five votes every minute!

Impressive for a browser which has a much smaller marketshare than the big players. So, what happened? Had thousands of people suddenly woken up to the realisation that Opera *was* their favourite browser, and that they should vote for it instead of Chrome or Firefox?

Well, we did a little digging around and found that Opera’s marketing department wasn’t resting on its laurels.

The guys and gals at Opera tweeted and posted on Facebook, inviting their fans to participate in the poll. Opera has some 1.7 million fans on Facebook, so it’s really no surprise to see some of them vote for their browser of choice. And sure enough, straight after Opera publicised the poll via social media, the votes for Opera began to flood in. As of midday in the UK, Opera had raced into the lead.

We don’t actually mind that Opera publicised our browser poll – after all, we didn’t say that vendors were bound from rallying their supporters. If anything, Opera’s marketroids have shown some admirable velocity in encouraging their fans to take part.

But we do suspect that our (admittedly unscientific) poll may have been skewed somewhat by this spike in Opera-loving votes. (Interestingly, there was also a synchronous rise in votes for Opera’s rivals – presumably from those who follow Opera on social networks, but aren’t necessarily diehard fans).

So, come on Firefox lovers and those of you who think Chrome is the greatest thing since Netscape Navigator – what are you waiting for? There’s still time to cast your vote!

And is there really no-one who has a good word to say about Internet Explorer?

If you have an explanation for IE’s poor showing, or think Opera is right to be considered the safest browser, or have any other opinions on the survey – why not leave a comment below?

Thanks to Sara Warner for helping crunch the data, necessary to write this article.

59 comments on “Is Opera *really* the safest browser?”