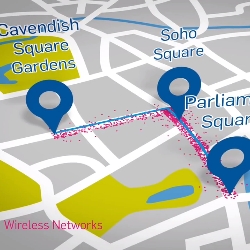 Many wireless networks in London are still using either outdated weak encryption or no encryption at all, according to research released today.

James Lyne changed out of the tweed jacket he normally wears when giving presentations for Sophos, and jumped on his bicycle for a 91 mile (147 km) cycle ride across central London. With help from a GPS, two dynamos, and a computer pimped up with solar panels, thousands of unsecured wireless networks were discovered as you can see in the video below.

Here’s a quick summary of the top findings of Project Warbike: A wireless network that isn’t properly protected runs the risk of being snooped upon – meaning your data is open for anyone to see. So think twice and always use a VPN (virtual private network) or SSL (secure sockets layer) if you have to use an insecure wireless network.

The warbiking experiment found the highest density of poorly-secured networks along streets which had a high number of small businesses. However, wireless security levels were pretty similar across all areas of London.

At the very least, wireless networks should be using WPA or WPA2 encryption. Even with those make sure that the network has a strong password, and don’t use a predictable default name for your SSID.

Find out more about Project Warbike, its findings, and tips on how to secure your wireless network.