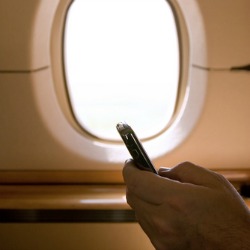 In line with its pledge to review the ban on in-flight gadget use, the US Federal Aviation Administration (FAA) late last month announced plans for an industry working group to study the use of portable electronic devices (PEDs) in-flight.

On August 31, the FAA asked for public comment, and that’s when the floodgates of gadget-deprived passengers truly opened wide.

One strong voice on behalf of the gadget-starved belongs to Mr. Simons and Mr. Chabris – two psychology professors writing for The Wall Street Journal (WSJ).

Their article reported on a poll they conducted of 492 American adults who’d flown in the past year, to find what they called “empirical evidence” of whether PED usage really interferes with airplane navigation systems.

Their findings? People are using them, planes aren’t falling out the sky, and therefore,

The ban on electronic devices rests on anecdotes, not on hard evidence - because there isn't any.

From the sample, 40% said they didn’t completely turn their phones off during takeoff and landing on their most recent flight.

More than 7% left their phones on, with the Wi-Fi and communications functions active.

Another 2% “pulled a full Baldwin,” the WSJ reports, actively using their phones when they weren’t supposed to.

The origin of the term, for those who don’t follow celebrity news: last December actor Alec Baldwin refused to stop playing with the Words With Friends app and got kicked off an American Airlines flight as a result.

Psychologists’ Chabris and Simmons extrapolate from these numbers that the odds are “infinitesimal” that all passengers traveling on an average-size US domestic flight have properly turned off their phones.

It’s tempting to point to the lack of smoking-wreckage heaps as being proof that using gadgets in-flight is perfectly safe, and that’s exactly what this article has done:

If personal electronics are really as dangerous as the FAA rules suggest, navigation and communication would be disrupted every day on domestic flights. But we don't see that.

The WSJ article suggests that the ban has been in force for so long without evidence to support it because our minds are illogical, relying on “cause detectors” to connect two events that occur close in time, construing cause and effect where none might actually exist:

There is no reason to doubt the anecdotes told by airline personnel about glitches that have occurred on flights when they also have discovered someone illicitly using a device.

Fear is a powerful motivator, and precaution is a natural response. Regulators are loath to make policies less restrictive, out of a justifiable concern for passenger safety. It is easy to visualize the horrific consequences should a phone cause a plane to crash, so the FAA imposes this inconvenience as a precaution.

An average high school science student could test the "interference" hypothesis, given the right equipment. But the FAA, NASA, the airline industry, and whoever, can not provide evidence that your computer and cell phone impact aircraft systems. In fact, its quite the opposite. We continuously see evidence that airplanes safely take off and land despite these ubiquitous electronic waves.

But the situation may not be as cut and dried as all that.

One commenter on Naked Security’s March writeup of the FAA’s ban review, Walter Shawlee 2, argued that the ban is not only warranted, but absolutely necessary to avoid what he called “overwhelming” problems with land-based networks.

Shawlee’s been in avionics for 30+ years and has done what he calls “serious lab work” on the issue.

His description of one experiment illustrates how nuanced the RF problems can be:

One interesting experiment done a few years ago in our lab showed that a fully FCC approved IBM laptop could easily block VOR reception, depending on the exact software run, and what it was doing at the time, This situation required low level signals (e.g. simulating far from the VOR station). This only makes sense, as the primary emissions are the address and data bus lines, which of course are dependent on what the CPU is doing. This probably explains some of the difficulty in reproducing 'events' after the fact. Plus, most interference problems are combinatorial, meaning that it is the SUM of various effects that finally causes the on board system to behave unexpectedly.

I was curious to hear what Shawlee thought about the poll in the WSJ, so I tracked him down.

Here’s the thing about what the WSJ article refers to as “empirical evidence”, he replied: passengers have no way of knowing what’s actually going wrong behind the scenes, regardless of whether or not planes are falling out of the skies.

"...the pilot does not come screaming out into the cabin saying, our navs are all dead, please shut off your cell phones!! perhaps they should, maybe people would be more careful."

"The empirical WSJ 'evidence' is merely that the planes don't explode in flight or something similar, NOT that serious problem are avoided in ANY way."

"In fact, hundreds of thousands of incident reports are generated of intermittent system failures constantly. we have no way of really tracking which are caused by what in flight event, BUT since a huge number go 'unresolved' with (NFF) No Fault Found subsequently, we have an increasing suspicion they are directly liked [sic] to passenger device use, especially since we have NASA documented troubleshooting by flight crews which has shown exactly that."

"PROVEN interference exists with compass systems, ILS, COMMs, GPS, and TCAS, and most worrisome, flight deck instruments, which are not really RF devices. the risks are quite real, and as PEDs become deliberate transmitters, rather than incidental ones, the risks to safe flight are escalating."

I don’t know how representative Shawlee is of those who work in avionics on these issues, but for his part, he thinks those of us who pine for unfettered in-flight gadgetry need consider our motivations. Many of us who fly have the entitled Alec Baldwin-esque attitude, Shawlee suggests. We see our behavior as justified simply because it suits us, he said, rather than having any real interest in the safety of others.

If Shawlee’s right about how intermittent RF interference from devices can be, you simply can’t point to the lack of plane carcasses as proof of anything, other than that the people flying these things and orchestrating our navigational infrastructure might well know enough to mitigate whatever dangers PEDs may present.

And in that case, thank you avionics professionals. Regardless of what happens with the ban, we appreciate whatever you do to make sure our planes aren’t plummeting.

Plane cockpit, phone and plane window and man on phone in plane images courtesy of Shutterstock

34 comments on “Ban on in-flight gadget use: based on fear or evidence?”