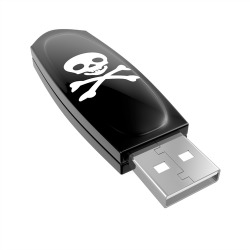 The first jury trial for a file-sharing suit brought by the major record labels has resulted in a $222,000 fine for a Minnesota woman accused of downloading and distributing more than 1,700 songs on the file-sharing site KaZaA.

The court also forbid the woman, Jammie Thomas-Rasset, from making sound recordings available for distribution in the future.

Prosecuting 1,700 songs might have been bit unwieldy, so the Recording Industry Association of America (RIAA) instead focused on 24 illegally downloaded and shared music files.

A group of six recording companies first contacted Thomas-Rasset in 2005 after hiring MediaSentry, an online investigative firm, to look into suspected copyright infringement.

She turned down their initial demand of a $4,500 settlement.

In a string of appeals, she also offered up her boyfriend or children as possible culprits.

Unfortunately for the defendant, the RIAA pulled in a forensic investigator who said that when the RIAA first came knocking, Thomas-Rasset whipped out her hard drive and replaced it with a new, KaZaA-scrubbed, downloaded-song-free hard drive.

Even without forensic evidence, her proclaimed ignorance of KaZaA was questionnable. After all, Thomas-Rasset isn’t a naïve P2P newbie. This is a woman who reportedly authored a case study about the legality of Napster.

And it’s most certainly better than what she would have theoretically had to cough up if the RIAA had the wherewithal to stick it to her for having allegedly infringed 1,700 copyrighted recordings at a $9,250 fine per song.

Thomas-Rasset has filed a motion that any statutory damage awards would be unconstitutional in her case.

Her lawyer, Kiwi Camara, told The Guardian that they would try to take the case to the US Supreme Court.

Do these bilious sums make the RIAA look like a bunch of bad guys?

I’d say so. The shakedowns have been a PR debacle, and some could argue that it paints the association as a bunch of out-of-touch, money-grubbing, big-business jerks.

According to court filings (PDF) from a class action lawsuit against the recording industry, 11,000 of those 18,000 people either settled immediately or, for whatever reason, weren’t prosecuted by the recording companies.

According to Ars Technica, Thomas-Rasset’s case has been the only one that’s come to an actual trial since the RIAA began its prosecution campaign years ago.

In 2008, the industry group hung up its litigation hat and instead enlisted ISPs to act as guard dogs to watch over the goods.

Nowadays, instead of seeking to shake down people for massive sums, the RIAA is instead asking ISPs to send gentle reminders that, ahem, pardon us, but what you’re doing is, you know, like, illegal?

Regarding what a true, fair fine would be, as in, something in the realm of what the association could feasibly recoup, I came across this anonymous comment:

Artists deserve to get paid for their work.

But these fines are berserk.

Let’s hope the case does go to the Supreme Court, as the lower courts don’t have much say in the matter of these inflated fines.

USB stick, warning on screen and headphones on laptop images courtesy of Shutterstock