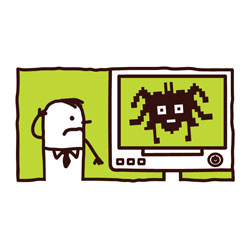 The company urged users of Internet Explorer 9 and earlier to take steps to protect their computers from public attacks on the newly discovered security hole.

The release follows warnings from a security researcher on Sunday that a cybercriminal group linked to web-based attacks was using the previously unknown (or “zero day”) hole in Internet Explorer to infect vulnerable Windows XP systems with a variant of the Poison Ivy Trojan horse program.

Eric Romang, a Luxembourg-based IT security advisor at ZATAZ.com, wrote over the weekend that he discovered the exploit when analyzing a batch of files hosted on one of the servers used to host attacks that exploited the Java vulnerability.

In its advisory, Microsoft acknowledged Romang’s discovery of a remote code execution vulnerability that exists in an Internet Explorer function for accessing an object that has been deleted or improperly allocated.

That vulnerability can corrupt a system’s memory in a way that attackers could use to run their own code with the permissions of the current user on Internet Explorer. The vulnerability can be remotely exploited using a web page designed to target the hole, the company said.

The Microsoft advisory also makes clear that the vulnerability affects a far bigger swath of the company’s installed base than Romang’s initial analysis suggests. Microsoft said it continues to investigate the problem and will address the issue with a security patch, or possibly even an out-of-cycle update. The company is also working with anti-malware vendors in its MAPP (Microsoft Active Protections Program) to provide protections to customers using third party security software.

The company said that customers who were worried about being attacked could try temporary workarounds to protect themselves. One suggestion was to install the Enhanced Mitigation Experience Toolkit, a free utility that can prevent compromise using Microsoft’s Data Execution Prevention technology.

The company also encouraged users to set the Internet and Local intranet security zone settings in Internet Explorer to “High”, which will block ActiveX Controls and Active Scripting on untrusted web sites.

If Microsoft’s temporary workaround doesn’t appeal to you, your only sensible option is to change your browser. If you need a suggestion as to which one to use, why not check out the recent discussion from our readers regarding which browser they recommend.