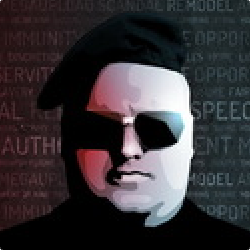 Things just got even more exciting/weird/incredible (delete as inapplicable) in the up-down-left-right saga of Kim Dotcom and Megaupload.

Kim Dotcom, as Naked Security readers will be unlikely to forget, is the larger-than-life file sharing entrepreneur who was arrested early in 2012 at his rented home in New Zealand.

(Dotcom wanted to buy the property – New Zealand’s most expensive – but he failed the Kiwi authorities’ “good character” test due to criminal convictions for insider trading and embezzlement.)

Dotcom is facing extradition to the US, where he’s been charged with a raft of serious offences related to his online service Megaupload, including racketeering (organised criminality) and money laundering.

Dotcom styles himself a “Freedom Fighter” on Twitter, presumably in reference to his own fight to remain free of US jurisdiction.

So far, he hasn’t been doing too badly, having already:

* Got out on bail, despite initially being remanded in custody.

* Had the search of his house declared legally dodgy.

* Won the right to see previously-suppressed FBI evidence against him.

* Obtained approval from the courts to access millions of dollars of previously-frozen funds.

He’ll no doubt be delighted at the latest development in his legal battle. The New Zealand Government’s official website, beehive.govt.nz, has published the Prime Minister’s call for an official inquiry into the actions of the country’s own intelligence service in garnering evidence against Megaupload.

Prime Minister John Key today announced he has requested an inquiry by the Inspector-General of Intelligence and Security into the circumstances of unlawful interception of communications of certain individuals by the Government Communications Security Bureau.

It’s the stuff of movies – as Dotcom, apparently unable to resist a cliche when it presents itself, has already pointed out:

I guess he’d better hope his prescience is as limited as his modesty!

(Things often end fairly badly for the crooks in Bond films, after all.)