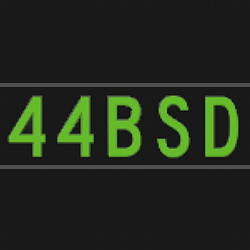 Naked Security readers with Macs routinely complain that Windows hogs our news limelight. Linux users complain they come third behind the Macsters. And our poor but invariably well-informed BSD fans barely even get a look-in to complain about their placement.

So, BSD diehards, here’s one for you.

In New South Wales, Australia, vehicle registration plates – or tags, license plates, index numbers, whatever you call them – are available in a dizzying range of colours, patterns, letter combinations, backgrounds and sizes, at a wide range of prices. By paying more money you can get a smaller plate with tinier letters in harder-to-read colours. But a small, dark plate won’t get you off traffic tickets.

Apparently, the cops get a say in any new plate design – and if their cameras can’t cope then it won’t get approved.

(I put that in the story to give it a privacy/law-and-order angle and thereby to sneak it past the editor.)

What they’re thinking of next, naturally, is revenue. Popular numbers like 007 and 888 are long gone in the old formats, even though people have money to spend on them. So, just as ICANN decided to expand the range of available internet domain names and reap the considerable rewards, NSW Roads and Maritime Services decided to open up the range of registration numbers.

Roads and Maritime seems to expect punters to be keenest on automotive themes, like 67GTO, 42JEEP and 450BHP.

That’s all very well, but Naked Security’s Sydney correspondent is calling on someone – anyone – with a true sense of UNIX history to get their geek on, and put 44BSD on the road:

Be sure to spend the extra dollars to get the green-on-black CRT terminal look. (Roads and Maritime call this style Bright Lights Venetian Green, but what do they know?)

At $275 for the plate and $99 per year to display it, it’s not cheap. But think of what you saved on your operating system and your running costs. Why not splash out and celebrate all that malware you missed out on?