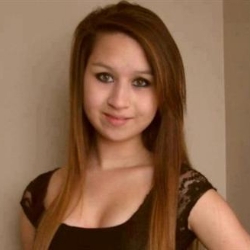 In September this year, a Canadian teenager called Amanda Todd posted a video on YouTube describing how she had been the victim of bullying.

15-year-old Amanda, from Port Coquitlam, British Columbia, described – with the aid of a series of flashcards – the horrific treatment she had received at the hands of bullies in her video entitled “My Story: Struggling, bullying, suicide and self harm”.

Amanda was bullied viciously on Facebook where her schoolmates were invited to join a page which included topless photographs of her, causing Amanda to suffer from anxiety and depression.

Despite her family moving house and her changing schools, the bullying continued and Amanda fell into drug-taking and alcohol.

After a violent encounter with another girl, Amanda drank bleach and attempted to kill herself.

"It killed me inside and I thought I actually was going to die."

Amanda admitted in the video that she had deliberately cut herself, and ends the movie by holding a card which reads:

"I have nobody. I need someone. My name is Amanda Todd."

Here is a copy of Amanda’s video. It makes for harrowing viewing:

On 10 October 2012, Amanda Todd committed suicide. It was just one week before her 16th birthday.

Amanda’s tragic death has stirred a national debate about cyberbullying, but the sad story has now developed a new twist.

People associating themselves with the Anonymous hacktivist group have published a video and documents, naming the person that they believe to have allegedly relentlessly harrassed Amanda Todd, and distributed topless photographs of the young teen. We aren’t going to publish the name of the person “doxed” by Anonymous here. We have no way of telling if he really is connected with Amanda Todd or not.

But even if he was, it should be clear to everyone that the most appropriate course of action is to pass any pertinent information onto the police – not to engage in internet vigilante revenge.

The death of Amanda Todd should be shocking to everyone. It certainly makes me think twice about letting a child of mine have a Facebook account, or use a webcam unsupervised, because of the horrible mess they could end up in.

But let’s make sure that none of us become internet bullies ourselves in our desire for justice after a young woman’s death. There’s an opportunity for Amanda’s life to mean something to far more people than those she ever met, in countries around the globe.

If we want Amanda’s life and legacy to make any difference to the world, we all need to take onboard the strong message about the importance of treating others with respect online.

I can imagine how publishing an alleged tormentor’s name, address and employment history online could lead to the same kind of ugly online persecution that Amanda Todd had to face.

Amanda Todd did something brave. She made a video about her horrible situation and it was watched around the world.

It’s not brave to hide behind an anonymous mask and publish details of the man you blame for Amanda’s depression and ultimate suicide. Take that info to the cops instead.