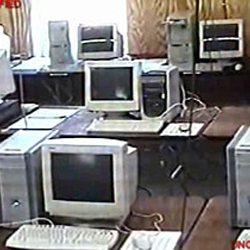 No shrapnel. No explosion. No buildings collapsing. No lives lost.

In what Boeing is calling “a new era in modern-day warfare,” a missile has fired bursts of high-powered microwaves at buildings and fried their computers and electrical systems – without damage to the structures themselves.

The missile is known as CHAMP, or Counter-electronics High-powered Advanced Missile Project.

Its makers are looking to one day change modern warfare, by defeating electronic targets with little or no collateral damage, including loss of civilian life. The successful test was carried out at the Utah Test and Training Range on 16 October by Boeing’s Phantom Works team and the US Air Force Research Laboratory Directed Energy Directorate, along with Raytheon Ktech, which supplied the high-power microwave (HPM).

The hope is that such technology will in the future deliver a sucker-punch to enemy’s systems before soldiers’ boots hit the ground, said Keith Coleman, CHAMP program manager for Boeing Phantom Works, quoted in the company’s writeup of the test:

"This technology marks a new era in modern-day warfare. … In the near future, this technology may be used to render an enemy's electronic and data systems useless even before the first troops or aircraft arrive."

As Boeing tells it, even the TV cameras set up to record the flight were knocked offline:

CHAMP approached its first target and fired a burst of High Power Microwaves at a two story building built on the test range. Inside rows of personal computers and electrical systems were turned on to gauge the effects of the powerful radio waves.

Seconds later the PC monitors went dark and cheers erupted in the conference room. CHAMP had successfully knocked out the computer and electrical systems in the target building. Even the television cameras set up to record the test were knocked off line without collateral damage.

Boeing put together this video showing a simulation of the missile attack and the resulting PC outage. The US might not be alone in pursuing such technology.

Recent conjecture has suggested that North Korea might also be developing electromagnetic pulse (EMP) weapons or bombs that could take out power grids, military and civilian electronics.

Such bursts of intense, microwave-like energy were first discovered during above-ground nuclear testing.

Are such weapons actually non-lethal?

Such an attack could close businesses and federal agencies, disrupt hospital service and communication, potentially knock out medical devices such as insulin pumps and pacemakers, and knock offline life-sustaining, critical infrastructure, including communications, energy networks, and food and water distribution networks.

This is nothing compared with the damage wrought by a nuclear explosion, yet the damage could still be severe.

The Washington Times quoted Peter V. Pry, a former CIA official and current executive director of the Task Force on National and Homeland Security that advises Congress on EMP and other threats to the critical infrastructures, who said that a mere blackout was minor compared with a nuclear or natural EMP disaster:

"Rogue states or terrorists armed with a single nuclear weapon detonated at high-altitude over the United States could cause a protracted blackout nationwide, that would last months or years and might even be unrecoverable."

As well, CHAMP raises questions about security. Could these drone-like missiles be subject to the same computer glitches that have bedeviled US drones?

As the Washington Post reported on Thursday, since January 2011, US drones have:

According to the Post, Air Force statistics show that predator drones in particular are more accident-prone than manned aircraft. Such mishaps get less attention, given that they involve no passengers or pilots.

The Post relied on a transcript to quote an unnamed Air Force squadron commander who testified to an investigative board:

"After that whole starting-itself incident, we were fairly wary of the aircraft and watched it pretty closely. ... Right now, I still think the software is not good."

Boeing declined to answer my questions regarding the safety, security and nonlethal nature of these missiles.

A nonlethal weapon sounds too good to be true. Given the performance of US drones, one might be forgiven for assuming that it well might be.