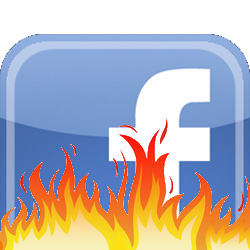 If you believe the internet, Anonymous hackers are planning to “take down” Facebook on Monday, November 5th.

The Daily Mail, Wired, CNET and many others are reporting that Anonymous hacktivists are upset with games firm Zynga.

Zynga is famous for games beloved by millions of Facebook users, including Farmville, Words with Friends, and Castleville.

However, it has been beset by disappointing financial results, after paying over the odds for OMGPop, developer of iOS flash-in-the-pan Draw Something, and Zynga recently announced it was laying off staff.

It didn’t take a PR genius to notice that Zynga craftily announced the lay-offs during Apple’s high profile launch of the iPad Mini, presumably in an attempt to bury the bad news.

According to a statement published on an Anonymous blog, Zynga is planning to lay off 1000 staff.

Zynga customers and Facebook users , We are anonymous . During the last few days anonymous has been targeting Zynga for the outrageous treatment of their employees and their actions against many developers .

We have come to believe that this actions of Zynga will result in massive layoff of a thousand people and legal actions against everyone that speaks to the public about this plan.

It will also come to end of the US game market as we know it as all this jobs will be replaced in other more convenient financial countries.

With a billion dollars cash sitting in a bank we do believe that such actions are an insult to the population and the behaviour of corporations like Zynga must change.

As we speak we are planning to release also all the games we've taken from their servers for free.

That being said we will stop the idea of the distribution of such games if Zynga will cease immediately the plan.

In an operation dubbed #OP MaZynga, Anonymous reportedly plan to “take down Facebook and release Zynga’s games for free download on 5 November”. It probably hasn’t escaped your notice that November 5th is bonfire night in the UK, the day us Brits celebrate Guy Fawkes’s attempt to blow up the Houses of Parliament in the failed Gunpowder plot of 1605. And – of course – it was the sinister Guy Fawkes mask in the movie “V for Vendetta” that Anonymous adopted as its symbol.

But there may be another reason why Facebook, November 5th and Anonymous might ring a bell in your memory..

Oh yes, there were threats that Anonymous would bring down Facebook on November 5th last year..

Do you remember what happened then? Of course, you don’t. Because nothing happened. Nothing at all.

The truth is that it’s very easy for someone to post a threat on the net threatening to bring down XYZ website on a certain day. And, in some cases, when words like “Anonymous” and “Facebook” are used, the media will feel it’s necessary to report it.

But that doesn’t mean we should panic.

My prediction, as last year, is that it is extremely unlikely that Facebook will be hacked or brought down on Monday 5 November. It’s only common sense really – if you were *really* going to attack a website, would you announce the fact in advance? Facebook has lots of smart security people working for it, and I’m sure that they will be just as security-conscious on November 5th as any other day.

There’s no point in the rest of us getting hot and bothered about a threat which may come to nothing – and indeed, was made last year with no outcome.

My advice is for people not to lose any more sleep over Facebook tonight, and in the coming days, than they normally lose over Facebook. Yes, there are many people who probably should be a bit wiser about how they use the site, and how they share their personal information on it, but that hasn’t changed because of an Anonymous threat.

If anything *does* happen to Facebook (or indeed any other website) we’ll be sure to offer advice on whether you as an individual need to do anything, or whether all that is required is action by the website’s owner to secure it.

But right now – there’s no advice that can be offered to regular internet users beyond the usual advice we give people about Facebook security and privacy on the other 364 days of the year.

22 comments on “Will Anonymous attack Facebook on November 5th? Here’s what you should do about it”