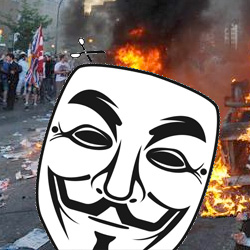 The Anonymous-affiliated are planning worldwide protests against government surveillance, as the following video declares:

As always, Anonymous supporters are likely to don masks with the image of their patron saint.

But for the first time, the smiling black and white masks that shield the identity of those protesters will be illegal in Canada (if the protest stops being peaceful).

It’s not only the Anonymous-affiliated whose masks will be banned. Canada’s House of Commons on Wednesday approved a bill that bans people from hiding their faces at all during riots.

The bill, Bill C-309, was championed by Alberta Conservative Blake Richards, who said it was a response to last year’s Stanley Cup riots in Vancouver, during which often-masked vandals smashed and lit fire to the city after their team lost to the Boston Bruins.

Violators will be facing up to 10 years in prison if convicted of covering their face during a riot or other “unlawful assembly.”

The bill, which doesn’t apply to protesters at peaceful demonstrations, passed 153-126. Richards said his aim isn’t to quash freedom of expression or peaceful protest. Rather, it’s to give police a tool to battle riots that have turned vicious, including those in Montreal, Vancouver and Toronto:

In fact, Richards said, this bill will help peaceful protesters:

"It will ensure that those who come to these events to cause trouble can be brought to justice and discouraged from those kinds of behaviours, so that the people who come to a gathering, for whatever peaceful means, whether it be protest or otherwise, have the ability to do their activities safely and freely."

My initial reaction to banning the anonymity bestowed by a mask is that it restrains individual liberty. But the Canadian legislators certainly have due cause, given that masks have been worn by people intent on, well, violence, destruction and mayhem.

So testified Michelle Rempel Parliamentary Secretary to the Minister of the Environment, in voicing her support for the bill:

"We watched the television coverage of the Toronto, Vancouver and Montreal riots. We saw willful acts of violence. We saw people physically injuring our law enforcement providers, and we also saw the damage it caused to businesses."

There’s no doubt that the cited Canadian riots were violent and jeopardized the health and safety of nonviolent protesters, law enforcement personnel and emergency responders, as video and print coverage clearly shows.

Police should have every means possible to protect themselves, citizens and property from violent thugs and vandals such as these.

I’m extremely hesitant to come to the conclusion that the Canadian bill to ban masks amounts to oppression, given the violence mask-clad protesters have carried out under cover of anonymity in these riots.

But it’s easy, given ever-increasing government surveillance, to fear the worst will be done with images of protesters who don’t shield their identities. Hopefully, Canadian law enforcement will respect the letter and spirit of the law and arrest only those who commit violent crimes.

As far as the Guy Fawkes mask goes, Anonymous members might bear in mind that every sale of the mask profits Time Warner, which owns the rights to the Guy Fawkes “V for Vendetta” image and collects a licensing fee with the sale of each mask.

Perhaps it’s better to make one out of recycled paper.

Better by far to protest peacefully behind that homemade mask.

52 comments on “Masks banned in Canadian riots, just in time for Anonymous day of action”