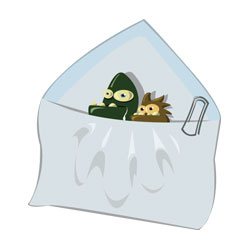 We looked at unauthorised email account access in the first of our series of articles on how to report a computer crime. Now we turn our heads to malware by email.

Andre receives an email with an attachment. The subject line indicates the attached file is a short movie of an A-list celebrity in a state of undress.

Andre is a fan of the celebrity purported to be the subject of the movie so he opens the attached file. It is in fact a variant of Troj/Poison malware.

Andre has an anti-virus application installed, but receives no alert.

The malware, when run, displays an error message which states that a codec is missing and that the movie cannot be played.

Andre gives the matter no further thought and takes no action. He has, of course, inadvertently infected his computer with malware.

The resulting infection compromises the security of Andre’s PC and opens a backdoor connection.

Two days later the malware is detected by Andre’s anti-virus software when the signatures are updated.

A cybercriminal who is a member of an underground forum had purchased a copy of the Troj/Poison backdoor malware kit.

The cybercriminal compiled his own Troj/Poison malware executable and distributed it via a list of email addresses, including Andre’s, that he paid for on the forum.

The cybercriminal disguised the malware as the celebrity movie in order to lure victims to run his Troj/Poison variant and distributed the malware by spamming it to the bulk list of email addresses he acquired.

The cybercriminal had no particular victim in mind; his intent was to lure as many victims as possible.

This is what the cybercriminal contravened when he disseminated the malware-filled email.

In the UK, when a crime has taken place it should be reported to the police, so Andre should go to his local police station to report it. In this case Andre should report the crime at his FBI Local Office, or US Secret Service or Internet Crime Complaint Centre.

A computer crime victim, like Andre, should report their incident to their local police service. If appropriate, it will be escalated for the attention of the agency with federal responsibility, the RCMP.

Andre should report the crime to the Australian State or Territory Police.

Andre may want to consider preserving the original email he received, and any anti-virus alert log that was generated as a result of the infection. Andre should run a malware removal tool to identify and clean up the infection. (Sophos does a free Virus Removal Tool which does just this.)

As the effects of different kinds of malware vary considerably, he should also talk to his anti-virus vendor for advice on any other remediation he should perform which is particular to the kind of malware he has.

In future, Andre should always exercise caution when downloading attachments from emails that he is not expecting.

He should also always make sure his anti-virus signatures are kept up to date, and that his operating system and applications are patched.

10 comments on “How to report a computer crime: malware by email”