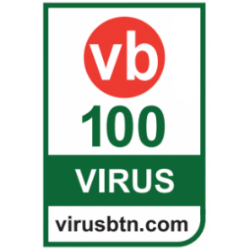 Just as with the tests that Virus Bulletin conducts on other operating system platforms, the VB100 title is only awarded if a product is capable of detecting all in-the-wild viruses in both on-demand and on-access modes without suffering from any false positives.

Sophos performed well in the tests, outperforming a number of competing firms, and was awarded the VB100 title by detecting 100% of the viruses in Virus Bulletin’s “in-the-wild” collection and not having any false alarms.

“Sophos put in a very strong performance in our latest comparative, easily earning VB100 certification and achieving good scores in all our measures. Stability was particularly impressive, with no problems encountered at all even in heavy stress tests - this earns Sophos our highest possible rating of ‘Solid’ for a second consecutive test, one of only two products to achieve this feat.”

More information about this latest test can be found in the October 2012 edition of Virus Bulletin magazine, that has just been published.