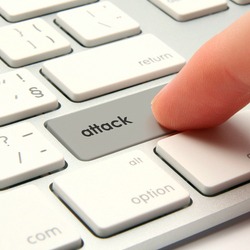 So far, we’ve looked at unauthorised email account access and malware in our series of articles on how to report a computer crime. In this article, we’ll look at an SQL injection attack.

A company has a web server and associated database configured to serve dynamic content. The company has set up its website insecurely, leaving it vulnerable to input validation attacks.

This results in the deletion of a number of tables from the database, rendering the company website inoperable. In this case the cybercriminal commits two offences in the UK. Initially, he commits the offence of “Unauthorised Access” by using SQL injection to facilitate access to the company’s server.

He then commits a further offence of “Unauthorised Act with Intent to Impair” when he deletes the database tables, impairing the functionality of the database server.

Under these circumstances there has been a definite targeted attack.

This is what the cybercriminal contravened when he used a SQL injection to facilitate access to the company’s server.

In the UK, when a crime has taken place it should be reported to the police, so a representative of the company should report it at the local police station. The company should report the attack to their local police service. If appropriate, it will be escalated for the attention of the agency with federal responsibility, the RCMP.

The company should report the crime to the Australian State or Territory Police.

The company should keep as many logs as possible as potential evidence.

The company should take down the affected site and replace it with a holding page.

Going forward, the company should enable full logging on the server (if it was not enabled previously). Incomplete logging can prevent identification/analysis of future attacks.

It could also consider adding its own scripts to catalogue the entire contents of the web folders (to highlight unexpected file additions or modifications).

Once the site has been cleaned it can be brought back online.

In future, the company should consider proper security auditing of their website by an accredited penetration testing professional or company.

If you’re interested in reading more about the different types of attacks on web servers and the ways they can be protected, take a look at Sophos’s whitepaper on securing websites.

2 comments on “How to report a computer crime: SQL injection website attack”