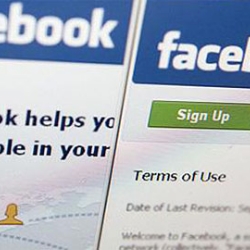 If you receive an email, apparently from Facebook, telling you that you have a new kind of profile – don’t rush to click on the link.

Emails have been spammed out with the subject line “You have a new profile”, which at first glance might appear as though they really are from the world’s largest social networking site.

Here’s a typical example of just such an email: If you look closely, you’ll notice that the spammers did a bad job of forging the “From:” address in that email, but if you hover your mouse over the links contained inside the email you’ll see more evidence that something strange is going on.

Instead your browser is redirected via an intermediary site. When our labs tested the link they ended up seeing a familiar sight – our “old friends” running that most infamous Canadian Pharmacy, the Toronto Drug Store. No doubt whoever is behind this latest spam campaign is earning commission from traffic that they drive to the drugs website, in particular if that traffic then buys a wheelbarrow-load of Viagra and Cialis.

Spam is a nuisance, of course, but as we have explained before – things could have been a lot worse.

The link in the email could have resulted in your computer becoming infected by malware, or your browser being taken to a lookalike Facebook site designed to phish your password.