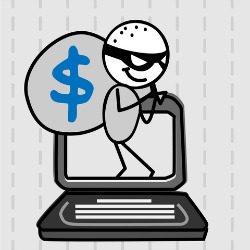 So far, we have looked at a SQL injection attack, unauthorised email account access and malware in our series of articles on how to report a computer crime. In this article, we’ll look at phishing.

Alex receives an email purporting to originate from a bank he has an account with.

The subject line reads “Important – your online banking has been suspended!!”

Alex panics and opens the email. The message tells Alex that his online account has been disabled and he will have to reactivate it.

Alex clicks on a link in the email and enters his details into the site he is directed to.

To Alex, the email appears authentic and the website he is directed to seems to be his usual bank website. Alex believes it is genuine.

The cybercriminal, who is the author of the email and operator of the phishing website, intends to sell the phished data on an underground forum.

Both Alex and the bank are the victims in this instance.

In this case, the cybercriminal commits fraud by false representation, contrary to Section 2 Fraud Act 2006, amongst other Fraud Act offences.

The relevant section in the Fraud Act states that in order to be false, the representation must be misleading and the person who makes it must be aware it is misleading.

This legislation applies to internet crimes through the representation being “submitted in any form to any system or device designed to receive, convey or respond to communications (with or without human intervention).”

This is what the cybercriminal contravened when he created the fake site and email with the intention of making a dishonest gain.

In the UK, when a crime has taken place it should be reported to the police, so Alex should immediately report it at the local police station.

Alex should report the phishing to his local police service. If appropriate, it will be escalated for the attention of the agency with federal responsibility, the RCMP.

Alex should report the crime to the Australian State or Territory Police.

Alex should preserve the original email as evidence. He should also inform his email service provider that he has reported the incident to the authorities. Alex should inform his bank of the phishing as soon as possible. It may prevent any fraudulent transfers and provide useful evidence to the bank of so-called ‘money mule’ accounts, which relay money while obscuring the true identity of the cybercriminal.

In future, Alex should be cautious of any unexpected emails which ask him to log in to an account, even if they look like they are genuine.

He should also always keep his anti-virus signatures up to date, and make sure his operating system and applications remain patched.

2 comments on “How to report a computer crime: Phishing attack”