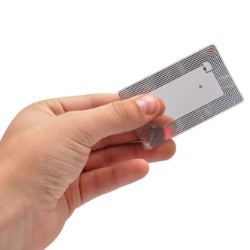 A Texas judge in the US has granted a temporary restraining order that prevents a San Antonio high school from suspending a student for refusing to wear a new, mandatory student ID card embedded with an RFID tracking chip.

A one-year pilot test of the tracking IDs was rolled out in October with two intentions: 1) keeping tabs on students’ whereabouts at all times and 2) making money.

The new system will cost $500,000, but school administrators have said that they’re hoping to increase attendance by tracking the students, which could help them to score up to $1.7 million from the state government.

As Wired notes, the district’s budget is tied to average daily attendance, as are most state-financed schools. For every student missing from his seat for morning roll call, the district misses out on one student’s worth of daily funding.

The schools, as the school district’s administrators told parents in letters explaining the program, have no way of knowing for sure if students are in school—hence the need for tracking.

The Rutherford Institute, which advocates for civil liberties, filed a petition [PDF] on behalf of suspended student Andrea Hernandez and on Wednesday announced that a district court judge has tentatively blocked her suspension, pending further hearings this week.

The schools already have 290 surveillance cameras trained on the students.

The SmartID card badges kick that surveillance up a notch with embedded RFID tracking chips that actively broadcast a signal at all times and cannot be turned off. Students are required to wear the badge on a lanyard around their necks. The badges identify students with their names and photos, via a bar code associated with each student’s Social Security number, and with an RFID chip that monitors his or her movements on campus from the minute they get there to the time they head home.

Students need the ID card to use the library or cafeteria, to vote in school elections, to attend certain school functions, and to purchase tickets to extracurricular activities. Hernandez claims that teachers are, in some cases, requiring use of the badge to use the bathroom.

School officials hope to eventually expand the program to encompass 112 schools and 100,000 students throughout the district.

The suspended student is a San Antonio sophomore at John Jay High School’s Science and Engineering Academy who’s refused to comply from the get-go.

Instead, Hernandez has, for reasons having to do with religion and privacy, chosen to wear her old, non-chipped badge and to pass out flyers explaining her decision.

The district notified Hernandez that they would block her attendance unless she wears the badge around her neck. Instead, beginning Monday, she would have been forced to attend another of the district’s high schools that hasn’t yet deployed the RFID tags.

School officials have refused to verify Hernandez’s identity with the old, conventional student ID card, in spite of having assured students that the old cards would be valid for four years. This has prevented Hernandez from voting for Homecoming King and Queen.

In Hernandez’s case, at least, school officials have been willing to let her attend school if she maintained even the appearance of compliance, offering to quietly remove the tracking chip from her card if she agrees to wear the badge without a battery or chip. They also stipulated that she would have to stop public dissent with the program.

But, he said, there’s still a lot work to be done when it comes to resisting the mindset that “everyone needs to be monitored and controlled” – particularly when such a mandate is motivated by money:

"There is something fundamentally disturbing about this school district's insistence on steamrolling students into complying with programs that have nothing whatsoever to do with academic priorities and everything to do with fattening school coffers."

"Regimes in the past have always started with the schools, where they develop a compliant citizenry. These 'Student Locator' programs are ultimately aimed at getting students used to living in a total surveillance state where there will be no privacy, and wherever you go and whatever you text or email will be watched by the government.”

Some parents have called the tracking chips an invasion of privacy akin to tracking cattle, and a coalition of privacy and civil liberties organizations including the American Civil Liberties Union has called for a moratorium on the technology.

It also charged the school with violating the 1st and 14th Amendments to the United States Constitution, which forbid, respectively, hampering freedom of religious exercise and speech, and abridging liberty.

On my initial writeup of this program, multiple readers suggested that a quick spin in the microwave would be the easiest solution for Hernandez or others who find mandatory tracking badges intrusive.

Such a step would, however, be akin to the school district’s aims, as it puts a higher value on compliance than on the actual, stated purpose of increasing attendance.

As it is, there are multiple chipping programs now in use or proposed in schools throughout the country.

Rather than nuking the cards, I believe that these chipping programs should instead be legislated into oblivion.

Only then will nuking the cards be a truly satisfying action.