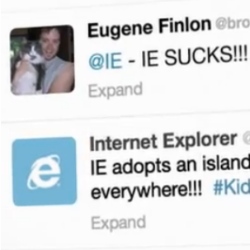 There are plenty of people who love to hate Microsoft Internet Explorer.

The browser has been steadily losing marketshare to the likes of Google Chrome and Mozilla Firefox in recent years.

Old versions of Internet Explorer, such as the ghastly IE 6 (which Microsoft has begged users to stop using), are riddled with security holes – and that probably hasn’t helped the ongoing impression amongst many net users that Microsoft’s browser is inherently inferior.

Microsoft is well aware of the strength of anti-Internet Explorer feeling out there, and has just released a rather fun video, starring someone who clearly loathes Internet Explorer with a passion:

Well, at least Microsoft is proving it has a sense of humour. The company has even created a website, www.browseryoulovedtohate.com/, which declares “It’s good now… No, really”.

Maybe there’s some information up there which deals with security – but I wasn’t able to find it.

(By the way, you should probably ignore the high ranking of Opera in that poll – as it was somewhat.. err.. influenced by Opera encouraging its users to vote)

So, what do you think of Microsoft’s marketing campaign for Internet Explorer? Would it get you to change your mind if you are a steadfast IE hater?

Does Internet Explorer suck less when it comes to security than other browsers?

Have your say in our poll, and feel free to leave a comment below.

34 comments on “Internet Explorer sucks less than it used to, claims Microsoft”