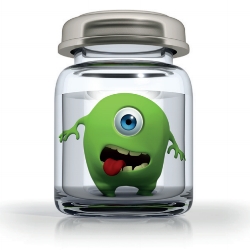 It’s December, which means it’s time for security vendors to start rolling out their annual round-ups, making predictions about what we can expect in the next 12 months.

The latest edition of the Sophos Security Threat Report has just been published, and is well worth a read.

Topics included in the Sophos Security Threat Report 2013 include: Amongst the many interesting sections of the report is a discusson of the notorious Blackhole exploit kit, which we have written about frequently on Naked Security.

The Blackhole exploit kit has become the most successful malware kit operating on the internet – combining technical dexterity with a business model that would make Harvard Business School MBA students salivate.

Sophos’s research reveals where in the world most Blackhole exploit sites are being hosted. Another section of the Sophos Security Threat Report 2013 attempts to determine the levels of malware attacks (successful or otherwise) experienced by different countries, with – perhaps – surprising results: There’s lots more information in the full Sophos Security Threat Report, which can be downloaded for free right now. (No registration required).

So, why not take a look at the Security Threat Report 2013 for yourself? And let us know what you think by leaving a comment.

In addition, you can sign-up for a web seminar about the security threat report that we will be holding on Tuesday December 11th 2012, at 2pm ET / 11am PT.

If you attend the web seminar you can hear SophosLabs expert Richard Wang describe what 2013 might bring, and how attackers extended their reach to new platforms like cloud services and mobile devices, adopted malware toolkits to build smarter attacks and targeted badly-configured websites in the last year.