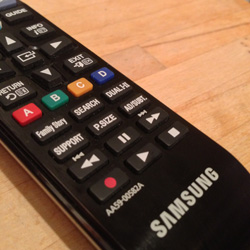 Don’t blame the dog for stepping on the remote control – there’s a remote possibility it could be hackers who’ve hijacked your smart TV.

Researchers with Malta-based security consultancy and bug seller ReVuln have found a vulnerability in an unspecified model of a Samsung LED 3D TV that they exploited to get root access to the TV and any attached USB drives.

In a video titled “The TV is Watching You”, ReVuln shows a Samsung TV screen with which the researchers systematically fiddle.

By exploiting the vulnerability, ReVuln also found that they could retrieve the drive image, mount it locally, and check for sensitive documents or material that should remain private, such as usernames, passwords, financial documents, or any other type of material typically kept on USB drives.

If the victim uses a remote controller, ReVuln also found that they could get its configuration and thereby control the TV remotely. "If the attacker has full control of the TV...then he can do everything like stealing accounts to the worst scenario of using the integrated webcam and microphone to 'watch' the victim."

The vulnerability extends beyond one specific model tested in the firm’s lab, he said:

"The vulnerability affects multiple models and generations of the devices produced by this vendor, so not just a specific model as tested in our lab at ReVuln."

ReVuln is a recent entrant into the market for buying and selling bug and vulnerability information and mostly focuses on vulnerabilities in SCADA and ICS software that run utilities, industrial systems and the like.

Auriemma has played around with TVs before. In April, he stumbled on a vulnerability in all current versions of Samsung TVs and Blu-Ray systems that would allow an attacker to gain remote access.

At the time, he said that the vulnerabilities could be found in all Samsung devices with support for remote controllers.

One hopes that the researchers have acted responsibly and informed Samsung of the vulnerabilities in their consumer devices, and that an over-the-internet firmware update to plug the security holes will be forthcoming.