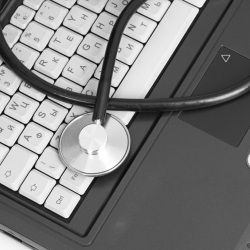 Competent healthcare providers are great at medical things, be it measuring fasting blood sugar to diagnose diabetes, swabbing the backs of our throats, or clearing plaque off our grubby molars.

Securing electronic devices or health records? Not so much.

That’s the takeaway from a study from the Ponemon Institute, which surveyed 80 healthcare organisations in the US and found that 75% don’t secure medical devices containing sensitive patient data, while 94% have leaked data in the last two years (mostly due to staff negligence). The thinking being, most likely, that securing such devices just isn’t healthcare’s job, the report suggests:

"This finding may reflect the possibility that they believe it is the responsibility of the vendor - not the health care provider - to protect these devices."

Indeed, concerns over medical device security recently prompted the US Government Accountability Office (GAO), with prodding from Congress, to issue a report recommending that the US Food and Drug Administration (FDA) start thinking about how to secure insulin pumps and implantable defibrillators from being vulnerable to targeted attacks.

Meanwhile, just as medical providers move toward electronic records and health information exchanges where they can share files, the survey finds that cyberattacks against healthcare organisations are growing in frequency.

Here are just three of the healthcare breach headlines that have appeared since 30 November 2012:

Obviously, as with many industries, human error is at the heart of most data breaches, be it stolen laptops, lost USB memory sticks, or misplaced fill-in-the-blank devices.

As it goes with rocket scientists, so too does it go with healthcare providers: Ponemon Institute’s survey found that the top three causes for data breaches at healthcare providers were, in fact, lost or stolen computing devices, employee mistakes, and third-party snafus.

The price of all these breaches is increasing. Ponemon calculates that the average cost to a breached organisation will hit $2.4 million over the course of two years, up slightly from $2.2 million in 2011 and $2.1 million in 2010. Here are more findings from the report:

It’s interesting to note that while 94% of respondents had at least one data breach in the previous two years, 45% report that they had more than five incidents. That’s up from only 29% that reported birthing data breach quintuplets (sorry! Couldn’t resist!) in 2010.

What’s up with that? Ponemon suggests that that particular finding underlines the importance of “determining the cause of a breach and what steps need to be taken to address areas potentially vulnerable to future incidents.”

Translate that into English, and you’ll likely arrive at a number of conclusions, one of which NASA came up with, after a string of data breaches.

To wit: after the US space agency suffered yet another unencrypted laptop theft in November 2012, it scrambled to require full-disk encryption agency-wide. Or perhaps, similarly, these strings of healthcare data breaches will lead to rules that lead to enforcement of encryption on USB keys.

That’s a lesson the Greater Manchester Police learned the hard way after an unencrypted USB key was stolen from an officer’s home – a data breach for which the UK Information Commissioner’s Office slapped them with a £150,000 fine.

Computer with stethoscope image from Shutterstock.

3 comments on “Report: 94% of US hospitals suffered data breaches, and 45% had quintuplets”