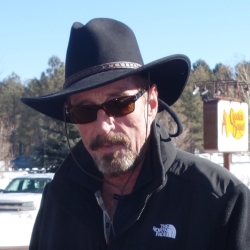 He’s not had anything to do with the company that bears his name (and was subsequently acquired by Intel) since the early 1990s, but that doesn’t mean that his involvement with malware has come to an end.

Many people have been following the bizarre story of John McAfee, who has been on the run from the Belize police since mid-November, had his location leaked to the world in a photo’s EXIF meta-data, and was hastily deported from his Guatemala hide-out to the United States.

Throughout his escapades, John McAfee has been keeping the internet entertained and informed of his swashbuckling exploits via his blog.

Most recently, John McAfee claims that he gave Belize officials cheap laptops that had been deliberately pre-infected with keylogging spyware. I purchased 75 cheap laptop computers and, with trusted help, installed invisible keystroke logging software on all of them - the keind that calls home (to me) and disgorges the text files. It also, on command, turns on and off, the microphone and camera - and sends these files on command.

I hired four trusted people full time to monitor the text files and provide myself with the subsequent passwords for everyone's email, Facebook, private message boards and other passworded accounts. The keystroke monitoring continued after the password collection, in order to document text input and would later be deleted. So nothing was missed...

67-year-old McAfee goes on to claim that he also hired 23 women and six men as operatives to seduce and spy upon his intended targets.

These men and women were given simple training on how to access and load software on someone's computer while they slept, or ate or made long phone calls etc.

It's dead simple if you're sleeping with someone - "Hey Babe, can I borrow your computer to check my email?" - A little more complex if you're not - but not much.

According to his blog post, the anti-virus veteran ended up living with eight of the female honeytraps, and was nearly killed by one who turned out to be a double agent.

John McAfee’s spying didn’t stop there, however. According to his blog post he also infiltrated two local phone companies, and paid workers to tap phones and provide lists of who his targets were in contact with.

Is John McAfee telling the truth? Or spinning a fanciful tale for his own entertainment? There is no way, of course, for us to verify John McAfee’s colourful story – which goes on to claim that there is an international terrorist conspiracy run from Belize.

But if elements of this story are true (such as the deliberate spreading of keylogging malware and the snooping on sensitive passwords) that is unlikely to be popular with the-powers-that-be in Belize.