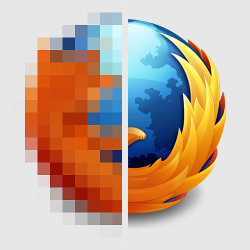 Firefox 18 has been released.

This month, there were 2917 bugs patched, with 21 security fixes.

Twelve of the security fixes were deemed critical.

There’s also a brand-new JavaScript compiler (though it augments, rather than replaces, the old one), and full-on support for Retina displays on the groovier sorts of Mac.

The big-feature news, according to the Mozilla Foundation, is the official introduction of a new JavaScript engine, known as IonMonkey.

There have been lots of Monkeys in Mozilla’s JavaScript stable, most recently TraceMonkey and JaegerMonkey. These have both offered what’s known as Just In Time compilation, or JIT.

This is a feature that converts JavaScript code, which has traditionally been compiled to some kind of machine-independent internal representation and then interpreted, directly into machine code.

This can improve runtime performance greatly, albeit with potential security costs. (There’s obviously a lot more to go wrong when you generate machine code and feed it directly into the CPU.)

But instead of converting an entire JavaScript module into machine code up front, as you might do with a standalone C/C++ program, a JIT compiler produces machine code chunks only when they’re about to be executed for the first time.

This avoids lengthy startup delays, which can be annoying in an interactive environment like a browser, especially if you load a large JavaScript program but only end up using a tiny fraction of its features.

IonMonkey is supposed to improve the code optimisation habits of the JaegerMonkey JIT compiler, allowing it to generate code that’s 25% faster, at least in carefully-chosen benchmarks showcased by Mozilla.

This new feature comes at a cost: complexity.

IonMonkey does more work preparing your code to run, so it only boosts overall speed for JavaScript that runs for a while, such as a game or a content viewer. JaegerMonkey has therefore been retained as well, and is still used for simpler-looking JavaScript programs.

The security fix that will probably ring the most bells with Naked Security readers is the one that officially deals with the TURKTRUST SSL certificate blunder.

The code diff (the details of what was added to and removed from the source code itself, denoted by lines starting with plus and minus signs respectively) can be viewed online.

You will notice that it removes TURKTRUST‘s most recently issued root certificate (issued in 2007 and valid until 2017) altogether. Presuambly, when the dust has settled on this incident, TURKTRUST will mint a new root certificate and persuade the Mozilla team to re-adopt it as a bestower of trust.

The really groovy thing, at least for readers who are as fortunate as I am, and who own a MacBook Pro with Retina display, is that Firefox 18 now directly supports the enhanced-resolution Retina modes.

The text in your Firefox browser window now really does look like a printed page.

(I told Chester. His response? “Meh.” Ignore him. If you are a Retina-owning Firefox user, upgrade to Firefox 18 now for the HiDPI text rendering alone. It really is groovy.)

Of course, you can turn it on if you like, simply by visiting the URI about:config and changing the setting pdfjs.disabled from true to false.

I only had one disappointment in doing so, namely that when you’re in the PDF viewer, the Retina display isn’t properly supported.

In a HiDPI Retina mode, PDF text is blurrier than in the corresponding non-Retina mode, presumably because the display is trying to improve things with anti-aliasing but merely exaggerating the lower resolution of the content.

Still, you can’t have everything.

I’ll take print-quality sharpness on regular web pages, faster JavaScript and the numerous security fixes, and hope that Mozilla ramps up the built-in PDF viewer by the time it goes live by default.