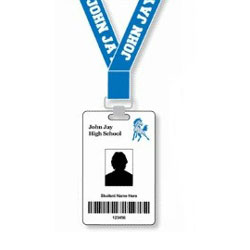 A Texas high school student in the US on Tuesday was ordered to wear an RFID tracking badge that she claims bears the “mark of the beast”, but by Friday she had turned the case right back around, asking a federal appeals court to overturn the order to either wear a chip-less badge or change schools.

On Tuesday, a lower federal court had concluded that 15-year-old sophomore Andrea Hernandez’s right of religion had not been breached by the mandated tag.

A Texas federal judge found that the school’s offer to accommodate her by requiring her to wear a neutered ID badge – one stripped of RFID chip – was ample accommodation for her religious objections.

The judge said on Tuesday that Hernandez had two choices: if she wanted to stay at the John Jay High School, she’d be required to wear the badge.

Otherwise, she could pick up and transfer to a new school by January 18, the end of the semester.

In the appeal [PDF] filed on Friday, Hernandez’s attorney said that Andrea objects to participating in the school district’s so-called “Student Locator Project” on the basis of the Book of Revelation.

The Book of Revelation states that an individual’s acceptance of a certain code identified with his or her person as a sign of submission to government authority is a form of idolatry, or submission to a false god.

The school offered to let her wear a de-chipped badge and thereby keep up the pretense of participating in the project, but that’s a moot point, given that the badge itself would then be a “mark of the beast” and a tacit sign of her participation in the program, wrote her lawyer:

"By express support for the Project through wearing its visible symbol on her person, Andrea would be expressing support for a program to which she adamantly objects on the basis of her sincere religious beliefs. This, in her view, would be dishonest."

"To Andrea, this 'accommodation' is similar to allowing a religious adherent who must eat a pork-free diet to have his pork-free diet, but to require him to wear a shirt advocating pork."

A one-year pilot test of the tracking IDs was rolled out in October for two purposes: to keep tabs on students’ whereabouts at all times, and to make money.

The new system costs about $500,000, but school administrators have said that they’re hoping to increase attendance by tracking the students, which could help them to score up to $1.7 million from the state government.

The school district’s budget, like most state-financed schools, is tied to average daily attendance.

Hernandez refused to go along with the program, showing up at the school with her father to protest in the fall.

The school tried to suspend her, but the Rutherford Institute, which advocates for civil liberties, filed a petition on Hernandez’s behalf.

In November, a district court judge blocked her suspension.

As Wired has noted in its coverage of Andrea Hernandez’s battle, there are multiple chipping programs now in use or proposed in schools throughout the US:

The first impulse of many who disagree with mandated tracking is to suggest that the badges be spun in a microwave for a bit.

That sounds gratifying, but as I’ve said in the past, I agree with Andrea Hernandez, her father and her legal advisors, who wouldn’t be satisfied with merely nuking the tags and the chips.

Rather, they’re fighting the mindset that everyone must be monitored and controlled.