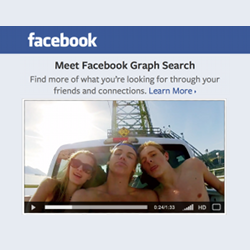 The UK’s Guardian newspaper went for broke yesterday with a headline speculating what Facebook’s “big announcement” on Tuesday morning would be.

The Guardian’s strapline (that’s jargon for subheading, by the way), backed one of three guesses by industry analysts: a smartphone, a new-look news feed, or the introduction of per-message charging:

Further down in the article, the Guardian admitted of a fourth option, namely that the social networking giant might announce a “search engine to rival Google.”

That was the closest guess, but still not spot-on.

The big announcement turned out to be a thing called Graph Search, which is supposed to let you “find more of what you’re looking for through your friends and connections”: In Facebook’s own words, “with graph search you can look up anything shared with you on Facebook, and others can find stuff you’ve shared with them. Each person sees unique results.”

There’s not a huge amount to go on yet.

The biggest clue is a video that sort-of explains why this isn’t a search engine to rival Google, but actually a whole new kettle of fish.

The video starts with our unseen user entering the search term trail running:

But why search for that on Facebook? Google can find you any number of trails to run on. Bush trails are search engine territory.

What you really should be searching for is my friends who like trail running, as our unseen user quickly realises:

From this point, you’ll enjoy a breathless video of cheerfully fresh and fit-looking youngsters having fun with friends, largely under sunny skies, or in perfectly powdery snow, or both.

Some of their “fun” might well be illegal in your country, and not terribly safe, such as riding without sensible sun protection in the load bed of a pick-up truck on a public road:

But, no matter. You’ve got your friends, and you can make your own fun. Or something.

Facebook has been quick to state the obvious, namely that this isn’t like Google search, where you mine other people’s externally-published data and websites to come up with a list of choices, but is instead a cleverly-programmed way of searching and presenting information that you and your friends have already uploaded and made public on the social network itself.

In other words, at least in theory, no-one will be able to find anything on Facebook with Graph Search that they couldn’t already have found and viewed on Facebook. If you marked it private, it’s still private. All you’re getting is a chance to “explore Facebook in a whole new way.” Facebook, however, has been savvy enough to admit that anything that makes it easier to join the personal information dots online ought to grab your privacy attention.

And “joining the dots” is an apposite metaphor for Graph Search, since graphs in computer science consist of dots, or nodes, joined together by connecting lines, or arcs. (Or vertices and edges, if you prefer.)

Mark Zuckerberg himself said, in his Graph Search announcement, that, “We realise that people are going to care what shows up about them in search.”

That may sound like stating the obvious to you and me, but, to be fair, Facebook’s introductory Graph Search pages do reinforce both the need for privacy settings, and the means by which you can tweak and verify them.

These pages also remind you of how to handle the controversial issue of photo tagging, including what to do if someone else uploads a photo of you without your permission (not a whole lot, sadly). If you’re the kind of person who already willingly shares details about the who, what, where and when of your life as part of your socialising, you’re probably going to love this. If you’re not, then you’re probably not on Facebook anyway, so the whole thing is of little account.

The only really sour taste I got from the whole thing was the sign-up process.

Surprise, surprise, but Graph Search isn’t actually ready yet. In fact, it’s merely “in a very limited beta program for English (US) audiences.”

I was invited to Try Graph Search, and thereby to find out when I could start using it. I thought I’d report on its availability to you, so I followed the big button:

I then found myself in what I consider a borderline bait-and-switch.

Admittedly, the next button I clicked said Join Waiting List, but when I did so, Facebook never delivered the promised answer on availability.

All I got was a popup advising me that I was on the list, and would see an announcement on Facebook in due course so I could “switch to the new experience”:

So now I’m a signed-up, love-your-work-Facebook statistic, without any visible way to bail out after failing to get the answer I was promised.

In conclusion, then, I’ll go back to the question I posed in the headline, “Should you be cynical, cautious or excited?”

What’s your take on Graph Search? We’d love to hear your thoughts, so leave us a comment below…

15 comments on “Facebook’s Graph Search announcement – should you be cynical, cautious or excited?”