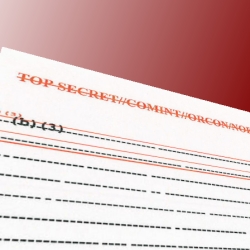 The Electronic Frontier Foundation managed to pry a secret document out of the US government that describes how authorities should interpret the Foreign Intelligence Surveillance Act (FISA) Amendments Act (FAA).

But a fat lot of good that does, given that a) they weren’t the actual documents the EFF requested and b) they were redacted into a ridiculously useless pile of dashes. The EFF received the redacted blobs a few days after Congress reauthorized FISA for another five years, at the end of December.

The documents were sent in response to the EFF’s Freedom of Information Act (FOIA) lawsuit for secret Foreign Intelligence Surveillance Court (FISC) opinions that found the government’s FAA surveillance unconstitutional.

As the EFF pointed out, referring to previous Wired coverage, FISA is the law used to conduct what many construe as unconstitutional surveillance of US citizens.

The New York Times has reported that intelligence officials and lawyers describe the National Security Agency (NSA) as engaging in significant, systemic “overcollection” of domestic communications of Americans.

Pre-reauthorization, Senator Jeff Merkley had sponsored an amendment, with bipartisan support, that would have given slightly more insight into the FAA and how the government interprets the law—interpretations that now take place in secret courts.

The amendment was a measured nudge towards greater transparency: it would have required the government to either declassify Foreign Intelligence Surveillance Court (FISC) opinions, or provide unclassified summaries of those opinions; or, even failing that, just give a progress report on the status of trying to declassify FISC opinions.

Despite the efforts of outspoken advocates for FAA reform, including Senators Merkley, Wyden, Udall, and Paul, the Senate voted down the Merkley Amendment, 54-37. The EFF has posted the government’s full response to its FOIA lawsuit [PDF].

The documents, in fact, aren’t the actual FISC opinions that the EFF had requested. Rather, they were summaries of those opinions, which are provided to Congressional intelligence committees in order to give them guidance in spying on citizens.

Even the opinion summaries the government did provide are likely most useful as scrap paper for grocery lists, given their mostly blank, white pages.

Zack Whittaker at ZDNet was kind enough to transcribe the only legible bits of text from the documents, which I likewise reproduce here:

I’m sure the Government will continue to inform the Committee about developments in this matter, and I’m sure we’ll continue to garner more blank, white scrap paper from such efforts.

Thank you, minority group of Senators, for your efforts to attain even a modicum of transparency into the laws used, presumably, unconstitutionally against US citizens.

As for the rest of you Senators, thanks for nothing whatsoever.