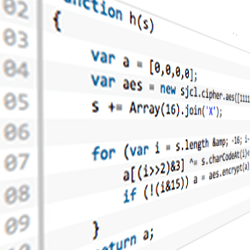 It does so by using cryptography to make sure it doesn’t see, and indeed cannot tell, what you’ve uploaded.

But to deliver on that promise, you have to get the crypto right.

As we explained yesterday, early indications were that Mega’s coders hadn’t done so: we wrote about problems with entropy (randomness), deduplication and the use of poorly-chosen data in Mega’s sign-up emails, needlessly making password dictionary attacks possible.

Researchers at hacking group fail0verflow subsequently wrote up yet another cryptographic error: the use of a faulty hash function to authenticate the JavaScript code that makes the whole service work.

You’d expect a secure site to deliver all its content via HTTPS, including (or perhaps especially) the JavaScript code that drives the cryptography.

Mega uses HTTPS, but to save money it serves up most of its JavaScript from “cheap” servers in distributed content delivery networks that use 1024-bit RSA keys.

→ Shorter RSA keys require less CPU power, so you get more performance for a given outlay. But distributed networks mean more servers and require widepsread key distribution, so you increase the risk of a compromise.

Lo! A neat way to have your security cake but pay less to deliver it.

Yesterday, however, fail0verflow documented the crypto code served up from the higher-security servers.

The hashing code used to authenticate the JavaScript coming from lower-security servers was the function h() below:

Don't worry if you don't speak JavaScript. All you need to know is this:

Ouch. You can't use CBC-MACs like that. You need to use a proper cryptographic hash instead.

SHA-3 or SHA-256 would probably be a good idea. As fail0verflow pointed out, SHA-1 would be OK and even MD5 would be better than the code above, despite MD5's known cryptographic weakness.

The silver lining, of course, is that cloud services can issue updates nearly instantaneously. Just serve the new code the next time a user visits your site.

And, sure enough, by this afternoon, Mega had taken fail0verflow's advice.

Now, SHA-256 is used instead of CBC-MAC with a hard-wired key.

Good work by Mega's coders to get the fixes out quickly. But if you're relying on Mega for your own privacy, you probably want to ask yourself why they didn't get the basics of their crypto implementation right up front.

Commenters on our previous article offered the reasonable suggestion that Mega's main cryptographic need is self-preservation: ensuring its own deniability in order to avoid getting taken down along with its users' data. Your privacy and security comes in second place.

There are two really simple solutions if that's true. You can choose either or both: use a different provider, or encrypt the data yourself before you let Mega encrypt it.

In fact, why not encrypt your own data yourself, always and anyway? It's your data, after all.